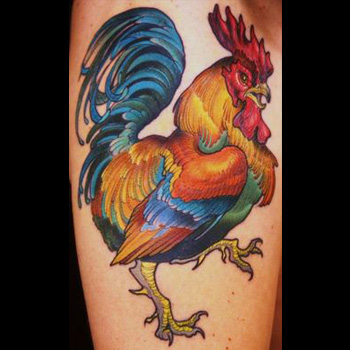 The choice of a rooster or chicken tattoo may seem odd, but these animals actually have strong ties to sailing culture, Eastern symbolism, and Celtic and Norse mythology. They also may conjure memories of childhood pets or trips to the family farm, or simply represent the qualities and traits you see in your own personality. With such diverse meanings, rooster and chicken tattoos are truly unique to the individual, and you will be able to design an image that is personal to you.

Chickens, or more specifically roosters, play an especially important role in Eastern culture. In China, roosters are ascribed five primary virtues: courage, wisdom, generosity, benevolence, and punctuality. Getting a rooster tattoo would be especially meaningful if these are virtues you see in, or wish for, yourself. The rooster is also one of the 12 animals of the Chinese zodiac. Anyone who is born in the Year of the Rooster is believed to be confident, capable, and resilient in the face of setbacks. Other attributes of people born in this year include beauty, sex appeal, and self-confidence: in other words, they are definitely the cock of the walk!

Rooster Crowing In The Morning:

In Japan, the crowing of a rooster is associated with the raucousness of the gods, and many people ascribe the rooster or cockerel with courageous and auspicious attributes. Within Japanese culture, chickens are also believed to be the errand messengers of the gods; indeed, chickens and roosters can be seen roaming the grounds of some shrines!

Korean culture sees chickens and roosters as punctual and intelligent creatures who understanding time which serve as good omens. They are also generous, patient, and trustworthy, while their willingness to fight to the bitter end demonstrates bravery and a strong will.

Not unlike Japanese culture's recognition of the chicken's importance as a messenger and communicator, Celtic and Norse mythology represent the rooster as the messenger for the underworld. Within this lore, the rooster would cry out warnings in dangerous times, as well as call out to souls which have fallen in battle.

If you see a rooster in a dream, it may indicate that you need a 'wake-up call', or that a time-sensitive issue is close at hand. Seeing a rooster strut or puff out its feathers may imply that you need to gain confidence or show off your strengths to others. In this sense, a rooster tattoo may symbolize that 'Aha!' moment in which you were jolted out of a rut and were able to become the person you needed to be.

Roosters and chickens are also important symbols in sailor culture. Though they made their careers on the water, many sailors were actually unable to swim. A custom arose whereby sailors would get a pig tattooed on one knee or foot and a chicken or rooster on the other: pigs and chickens were often carried aboard ships in wooden crates which, should the ship crash, floated quite well and were more likely than other debris to wash up on shore. Thus came about the saying, "Pig on the knee, safety at sea. A cock on the right, never lose a fight" (a nod to sailors' prevalence for brawls).

The Meaning of Rooster & Chicken Tattoos


As discussed in detail above, the chicken and rooster mean many different things depending on the culture and country in which they are depicted. Whether you are male or female, young or old, it is likely that something about the rooster and chicken will resonate with you, be it on a cultural, spiritual, or personal level. The various meanings of chickens and roosters in the different cultures and countries discussed above include, but are definitely not limited to:

There are several ways to design your rooster or chicken tattoo, and variations on the design will depend on your own interpretation of this animal symbol as well as the meaning you which it to represent. Work closely with your tattoo artist, and see what the two of you come up with!

This is a popular combination for sailors, those who have served in the Navy, or for anyone who is just nautically inclined. Though traditionally inked on the knees, you can choose to have the chicken or rooster and pig tattooed just about anywhere: ankles, calves, arms, shoulders, or back would all be excellent choices as well. In addition, you can combine the two animals into one image instead of having them separate (ie: one on each knee). If you really want to emphasize the sailing tradition, you can also get the saying of "Pig on the knee, safety at sea. A cock on the right, never lose a fight" added to the tattoo. 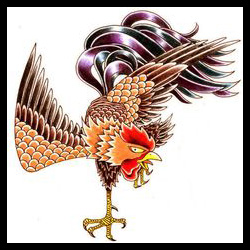 For those born in the Year of the Rooster, getting a tattoo of this Chinese zodiac symbol is a great way to express the traits of this animal: fortune, moral fortitude, punctuality, fidelity, and luck, among others. Work with your tattooist to inject an element of Chinese artwork into the design, or you could add the Chinese symbol for the rooster (or one of the specific traits) beneath the tattoo. 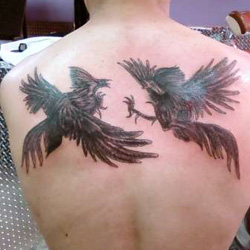 Less generally popular that the preceding two designs, tattoos of fighting roosters are more prevalent in South America, where rooster fighting is an ancient, if now controversial and in some places illegal, sport. The design itself features two roosters, often with brightly colored feathers and fully extended wings. This tattoo design can also indicate bravery and courageousness, as well as strength in battle. Depending on your own personal reason for the tattoo, you can adapt the roosters' facial expressions and even add apparel or text to clearly indicate a cultural sporting heritage or service in battle.

Roosters and chickens have strong cultural and spiritual meanings around the world, and getting a tattoo with these animals can represent your own heritage, beliefs, or traits you see in yourself. Make sure to work with your tattoo artist to personalize your design, and consider adding script in order to set your tattoo apart from others'. For custom design of a Roosters, you can check our Custom Tattoo Page.