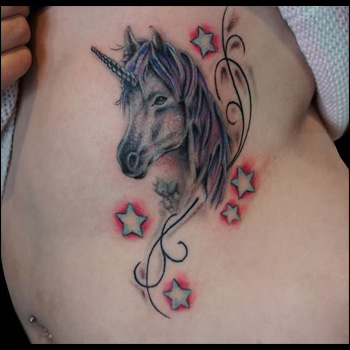 When it comes to mythical creatures, none is more beloved or as popular as The Unicorn. These magnificent creatures first appeared in Western mythology in 398 BC. The Greek historian, Ctesias of Cnidus, spoke of awe-inspiring "wild asses" in the exotic land on India which were "as big as a horse" with a "horn on their forehead". It could be that Ctesias was actually describing the Indian rhinoceros, but that didn't stop millions of people from superimposing Ctesias' description onto the image of a horse, thus creating the legend of The Unicorn.

During the Middle Ages, artisans took The Unicorn myth to a completely new dimension. The legend became intertwined with medicine, magic, and healing. It wasn't uncommon for members of various royal families to drink from a cup 'made' from the horn of a unicorn. In reality, They drank from a rhino's horn, but this notion gave rise to the idea that these animals were pure at heart, noble, courageous, and strong, all the traits of a good king or pure queen. No wonder, so many royal symbols and family crests have a unicorn in their designs.

Unicorns represent purity and charity, which are rare virtues in human society. According to some scholars, this may account for why many stories often lament about the rarity of a unicorn sighting. Some schools of thought propose that dolls resembling these noble creatures are often marketed to little girls, whether unintentionally or otherwise, in an attempt to promote these virtues in the 'fairer sex'.

But unicorns aren't solely a Western concept. In China, the legend of the Qilin is alive and well. The Qilin is one of four animals charged with the duty of helping to create the world. The animal quickly became associated with spiritual purity. Being touched by, or seeing, a unicorn meant that a person was ordained by God to carry out a task. According to various legends, both Confucius' and Buddha's mothers saw unicorns before giving birth to these spiritual men and in the Garden of Eden, the first creature to be named by Adam and Eve was a unicorn. The majestic animal was then blessed when God touched the tip of its horn.

But whether or not you believe that unicorns only belong in the realm of the X-files (or in Harry Potter books), a beautiful unicorn tattoo is a great way to bring a little luck and prosperity to your life.

The Meaning of Unicorn Tattoos

Given the rich history of these mythological creatures, unicorns have come to embody a number of traits, including:

While most Unicorn Tattoo designs are white, it isn't uncommon to have unicorns in a variety of colours (blue, black, white, pink) or designs that feature any number of additional elements. Some artists add other mythical creatures like fairies, gnomes, or dragons to play up the mysterious aura of these majestic creatures. It also isn't uncommon to add wings to a unicorn to reinforce the message of Freedom and Frivolity. At the end of the day, only you can decide how many or how few elements you'd like to incorporate into your design. Popular Unicorn Tattoo variations include:

The unicorn is so deeply entrenched in human history and mythology, that tribal patterns featuring these mythical creatures are now common tattoo design elements. Tribal Unicorn Tattoo designs often show unicorns in a dominant stance which highlights your powerful presence and inner strength. Getting this type of tattoo is a great way to show the world that you readily identify with the noble characteristics of these awe-inspiring legends.

The legend of the unicorn was alive and well in Ireland long before the ancient Romans set foot on her emerald shores. Celtic symbols and tattoos are linked to a rich spiritual and cultural history, which when combined with a unicorn, sends a clear message of Strength, Dominance, and Spiritual Power.

Images from My Little Pony and The Last Unicorn (1982) quickly come to mind when you think of Cartoon Unicorn Tattoos. Said pieces pay homage to the chaste representation of the unicorn. With cartoon unicorn tattoos, there is leeway to whimsical variations on the classic unicorn image and these tattoos usually point to an age of innocence for the person wearing them. Cartoon unicorn tattoos tend to be a 'girl thing', since there aren't many men (straight or otherwise) that are willing to walk around with the picture of a pink unicorn on their body.


When choosing the right tattoo design, there are a few notable things to keep in mind. First and foremost is the emotional and spiritual significance that you'll place on your new tattoo. Is your artwork simply for kicks and giggles or does it hold a deep spiritual meaning? How well does your tattoo express your personality and style? The best tattoos are those that have priceless personal value 20 minutes or 20 years from the day they were first inked onto your skin, so it's always wise to take your time creating a beautiful, meaningful design. If you need some inspiration, our tattoo artists can help you to create one-of-a-kind pieces. Simply visit our design page at www.itattoodesigns.com and take advantage of our Custom Design Service.