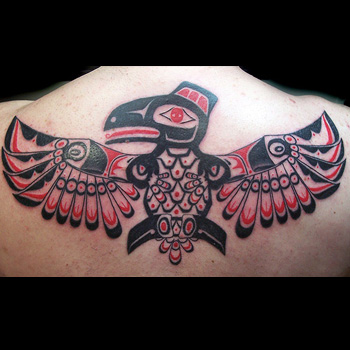 The Thunderbird is believed to have been inspired by the awe-inspiring image of the mighty Eagle in flight and it is no surprize that many of the characteristics that the Eagle live on in the Thunderbird. Like the Greek Griffin or the Egyptian Sphinx, the Thunderbird is a mythical creature meant to represent the best that mankind has to offer.

The Lakota name for the Thunderbird translates to 'sacred winged'. The word 'thunderbird' pays homage to the myth that this noble creature has the ability to create thunder with a flutter of its mighty wings and can influence natural events like rainfall, thunder, and cloud formation. This explains why the Thunderbird is seen as a symbol of Prosperity and Abundance, and the Bird Man dance (which originates from the Mississippian Indians) is a popular ceremony held in honour of the Thunderbird's sacred gifts to the tribe. The Thunderbird is a symbol of Creation. For many tribes, the Thunderbird was a servant of the Great Spirit, the Supreme Being that rules everything in the universe. It is seen as an animal of the Sun, bringing with it new possibilities with each coming dawn.

The Haida create elaborate masks in celebration of the Thunderbird's importance in their culture. There are legends in which the bravest and most honoured tribal members, chiefs, and warriors are blessed with a visit from the Thunderbird on their deathbed. The bird acts as a guide, escorting the spirit of the noble man to the sacred cedar forests. Cedar trees are believed to hold the spirit of the Thunderbird and are considered to be sacred. Destroying one of these magnificent trees is seen as a sign of blasphemy. Many of the famous totem poles of the Pacific Northwest are made of cedar wood. Various folklore traditions speak of stories in which the bird's spirit spends its days smoking tobacco from ornate cedar pipes, which also links the Thunderbird to another important part of Native American culture, tobacco.

But the most indelible image of the Thunderbird is that of a fierce and noble warrior. Shawnee and Iroquois warriors were famous for meticulously performing highly ritualized warrior dances before charging into battle in an attempt to appease the Thunderbird spirit and seal their victory over their enemies.

Today, the Thunderbird is an emblem of Power, Divinity, and Strength. It is more than just a sign of Might; it is a symbol of strength of character and your undefeated fighting spirit. No matter what, you won't give up, even if the stakes are stacked against you.

The Meaning of Thunderbird Tattoos

Across the Native American cultural landscape, the Thunderbird has come to symbolize many things, including: 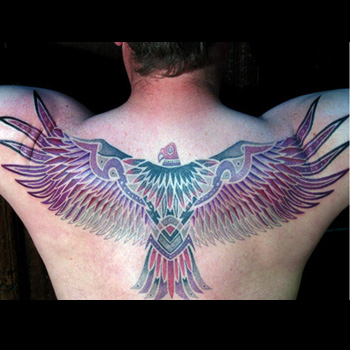 When it comes to Thunderbird Tattoos, these designs leave very little room for the artist to introduce a lot of variety. Thunderbird Tattoos are tribal designs and are done to invoke the spiritual power of this deeply revered and respected concept. Although the general profile remains similar across the board, each tribe incorporates certain elements that help you to identify which cultural background the design is from. These designs tend to be filled with vibrant color although it is not unusual to see black and white Thunderbird Tattoos. This design embodies all the traits of a noble warrior and honorable fighter.

If you are strong in heart and will, then a Thunderbird Tattoo is a great way to channel your fighting spirit. Whether man or woman, these designs fit all body types. Its symmetrical lines and vibrant colors conjure up images of power and inner strength, and even though the designs are all tribal in nature - thus leaving little room for creative reconstruction - they are rich in color and symbolism. Creating a Thunderbird Tattoo requires a little knowledge about the Native American tribe that you wish to associate with, since each tribe has specific elements that are added to tattoo designs. If you need help, our team of artists is more than happy to lend a hand. Visit our design page at www.itattoodesigns.com and take advantage of our Custom Design Service.