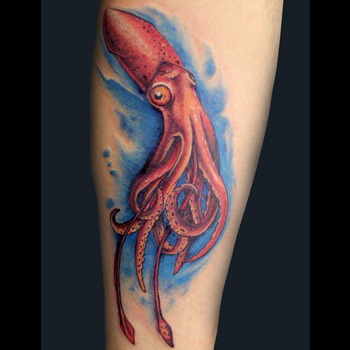 Squids are fascinating and mysterious creatures which are able to live in the darkest depths of the ocean, can change colors to reflect their environments, and shoot out dark ink as a protective measure against enemies. The symbolism of squids, as well as their diversity in size, color, and shape, means that every squid tattoo is unique, and choosing this design will ensure that no one else has a tattoo quite like yours.

Not unlike humans, squids come in all shapes and sizes, and their unique abilities make them symbolic of several different traits and attributes. Although technically spineless, as they are invertebrates, squids are not weak or easily tread upon, as the term 'spineless' frequently connotes. Instead, their spineless quality makes them incredibly flexible and hard to pin down - they are agile and graceful, and often prove difficult prey for their enemies. As a symbol of flexibility, a squid tattoo can demonstrate your own physical gracefulness, or your ability to adapt to changing circumstances and 'roll with the punches'.

Squids are also intelligent and tough creatures, with several defense mechanisms that make them worthy opponents for any underwater predator. In addition to their agility, squids have the chameleon-like ability to change colors and blend into their environments, thus warding off any nearby hunters. If a squid is found out, it can then unleash its other protective measure: a black cloud of ink that quickly and effectively hides the squid from its enemy and thereby gives it ample time to get away. These varied defensive traits make the squid a clever and quick creature that is able to fool most enemies, making the animal a symbol of defense, adaptability, and creativity.

Being underwater creatures, squids often stand for the attributes of water itself. Their ability to live deep beneath the surface of the water, and to seemingly float through their environment, embodies both the mysteriousness and fluidity of this element. Squids have also featured in much mythology and lore surrounding sailing and the ocean, as giant squids are incredibly fearsome creatures which can inflict tremendous damage almost any vessel sailing the high seas.

Octopus Vs. Squid - What is the Difference Between Them?

The several shapes, sizes, and colors that squids come in make them an incredibly diverse species of animals, and also allows any tattoo design to be inherently unique. One of the great things about squids is that they come in a variety of sizes: one could easily fill your entire back, but you could just as easily get a smaller squid on the base of your neck or on the inside of your wrist. You can even spread the squid out all over your body, with its head along your side ribcage and the tentacles going along your back or down your leg. The giant squid is a fearsome creature which can reach up to over 40 feet in length. As one of the more fearsome and elusive creatures of the deep, this makes the giant sperm whale (of Moby Dick fame) one of the only predators that is up to the challenge of catching a giant squid. This rivalry and contested strength give the squid and whale tattoo design a particular meaning compared to other squid tattoos. Showing the two sea creatures engaged in battle will create an intense design that demonstrates your own innate strength, bravery, and willingness to confront even the most challenging odds. This design would especially suit anyone looking to get a larger tattoo, and would look especially great as a full back or upper back design. 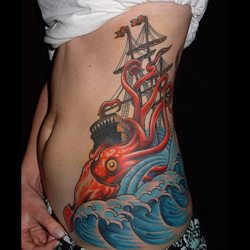 Within sailing lore, and even popular culture (with much thanks to the Pirates of the Caribbean film franchise), a squid is sometimes depicted as being able to destroy an entire boat, coming out of the darkest depths of the ocean to engulf a ship's sidings in its tentacles. Although this ability to crush a boat's helm and kill those on board is perhaps more rooted in mythology than actual facts, it nevertheless is a powerful depiction of the squid. Getting a tattoo of a squid/kraken creature with its tentacles wrapped around a boat demonstrates one's own power, as well as bravery in the face of any enemy, man or beast. It also demonstrates an affinity for sailor culture and life on the high seas, making this tattoo a good possibility for anyone who worked as a sailor or served in the Navy. Even more personal touches can be added by elaborating on the scene: those on board can be represented as one's enemies, or the ship can bear the name of one that was actually lost at sea. The possibilities are truly endless!

Another popular squid tattoo design is depicting the squid as it shoots out its protective ink. By showing the squid in this act of defense, you demonstrate your own ability to guard yourself against enemies, and to adapt to an ever-changing and at times dangerous environment. This type of design allows you to personalize the squid, choosing whatever size, shape, and color suits your own personality, in a way that some other squid tattoo designs do not. You can also add onto the design by inserting the enemy into the scene: maybe it is a shark, representing businesses or financial institutions that have tried to keep you down, or a human hunter, a recognition of man's own danger to himself.

Squid tattoos offer a great opportunity to demonstrate your personality and traits to others - whether you are dark and mysterious as the ocean itself, or powerful and fearsome as the giant squid, this tattoo provides excellent symbolism that resonates with almost every person. In addition, the variety of squids and potential scenes that can be created in a squid tattoo design means that you are guaranteed to have a unique tattoo. For custom design of a squid, you can check our Custom Tattoo Page.