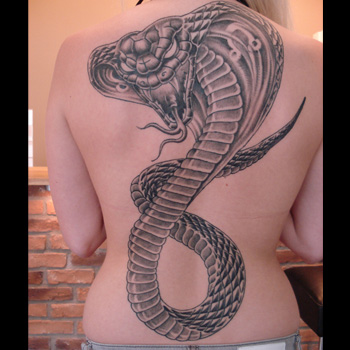 Vipers, Cobras, or Sea Serpents, nothing gets people riled up quite like the image of a slithering snake. These beautiful creatures have gotten a bad rap, thanks in part to their role in the Creation Story of Abrahamic religions like Judaism and Christianity. But snakes have been an integral part in the fabric of human history long before the tale of Adam and Eve was written.

In Hindu mythology, the serpent Shesha is one of the primary beings of Creation. As a Naga, Shesha supports the planets in the universe on several of his countless heads and is often shown carrying the Hindu deity, Vishnu, on his back as they float down the cosmic river. Many pagan cultures hold the Snake as a symbol of Rebirth and Healing due to the cyclical shredding of its skin.

Snakes are viewed as emblems of Renewal across the globe. In both the West African Ashanti culture and the numerous pre-Colombian peoples of Central America, there exists a legend of a snake god biting its own tail. This is a sign of the Cycle of Life and Death, similar to the famous Ouroboros from ancient Egypt. The Midgrade Serpent in Norse mythology is another extension of the 'snake biting its tail' tradition. According to folklore, JÖrmungandr was thrown into the cosmic ocean and grew so large that he encircled the world and his bouts with his archenemy, Thor, became the stuff of Nordic legend.


From the legendary serpentine tail of the Chimera to the infamous coils of Medusa, Snakes are a recurring feature of Greek mythology. Long ago, mankind knew that snake venom had the power to both protect and poison, as such these animals were often viewed to be a potent as a plethora of herbal plants and medicines. It's therefore no surprise that the god of Medicine and Healing, Asclepius, was always depicted with a staff that had a snake wrapped around it.

The snake become a potent symbol of Fertility for many old religions, a fact that may have been influenced by observing these creatures in a breeding ball. This imagery became synonymous with Sexual Desire and Seduction in Abrahamic religions and accounts for why the Book of Genesis shows Eve being tempted in the garden by a snake instead of another creature (admittedly, it's hard to picture a conniving hedgehog to be Eve's tempter). This tradition also explains why western cultures view snakes as vile, vindictive, and evil creatures. Many potent symbols of pagan religions were often demonized in the wake of Christianity's growing popularity and the Snake is just one of many indigenous victims to this rather unfortunate trend.

Whether you view these recondite reptiles with awe or absolute fear, Snakes are much more than the slithering devils that we make them out to be. As more people gain respect and adoration for these beautiful beings, it's no wonder that the number of snake owners, admirers, snake tattoo lovers are on the rise.

The Meaning of Snake Tattoo Designs

Depending on your cultural reference point, Snake Tattoos can symbolize a variety of characteristics and meanings. These include:

Whether you want a tattoo with Asian influences or one that's grounded in traditional tribal features, Snake Tattoos make exceptional pieces of body art. The beauty about these designs is that they can be draw and placed in such a manner that it accentuates your arms, back, legs, or torso. If your artist has a good feel for, and a wealth of knowledge of, human anatomy, he or she can create the illusion of a moving snake by positioning your tattoo on top of key muscle groups. By far, a tattoo of a moving snake is sure to get your ink noticed. Popular Snake Tattoo variations include:

Every indigenous society records its history and culture using a unique set of tribal patterns. The patterns have special meaning and is usually connected with the spiritual world and the elements of Nature from that region. Conversely, Snakes are some of the oldest religious symbols in human history. From the Germanic tribes of ancient Europe to the Native Americans on the plains of the Midwest, numerous cultures across the globe have associated these amazing creatures with countless deities and local folklore characters. As a tip of the hat to the strong spiritual connection with your indigenous heritage, Tribal Snake Tattoos are a great way to express your thoughts to the world.

From the banks of the Nile river to the Hindu temples in India, the King Cobra is revered as a sacred emblem of The Divine. As the royal symbol of pharaohs, The Uraeus represented the king's heavenly lineage and was key to commanding the loyalty of the Egyptian Empire's citizens. Across Burma and India, street side snake charmers make their rounds with a King Cobra in a wicker basket. They are tattooed with ink made from the snake's venom, which according to legend, this tattoo protects the charmer from any vicious snake attacks. Whether or not this claim has scientific backing is still a mystery. King Cobra Tattoos embody your connection with the Divine and are symbols of Status, Nobility, and Wealth.

The Snake is a representation of Sexual Passion and Temptation, whereas the Eagle is an animal reserved for only the most noble and morally upstanding personas. The two animals are quite a contrast to each other, so an Eagle and Snake Tattoo represents the conflict between our honorable intentions and our wild, vindictive nature. It is an expression of the struggle between doing what is right versus what is morally reprehensible; the war between Good and Evil. In most variations of the design, Good is triumphant and the Eagle is usually seen as the victor.

These lethal animals were once held in high esteem by the Aztecs, the Mayans, and other indigenous peoples of Central America. The importance of these creatures in North American history can't be overstated. When the American colonists embraced the famous Gadsden Flag with the iconic symbol of a rattlesnake and the words Don't Tread on Me, the image of the deadly rattlesnake as a mascot for the underdogs struck a nerve for many, especially those across the pond. Benjamin Franklin created a famous carving in which he urged various states of the fragile, young American colonies to rise up and join the fight against British oppression. In 1751, he jokingly suggested that as a token of appreciation for the British policy of sending convicted felons to America, the American colonists should send barrels filled with rattlesnakes to the king. Since then, a rattlesnake has come to embody the hidden might and unconquerable spirit of the Underdog.

A coiled snake is a deadly creature that is poised and prepared to unleash its fury at any moment. It is a sign that outward appearances can be deceptive, since under the calm surface, the Snake is ready to strike in a heartbeat. A Coiled Snake Tattoo shows the world that you have a deadly persona lurking underneath your seemingly composed and collected exterior.

You may have asked yourself why the universal symbol for Healing and Medicine is composed of two things (daggers and snakes) that can actually kill you. Known as the Caduceus, the image represents the staff of Asclepius, the Greek god of Medicine and Healing. Snakes have long been associated with pagan symbols of Rebirth and Fertility, which explains why this tattoo design has the lofty position of being universally known as a Renewal and Transformation.

"A rose by another name would smell as sweet."-William Shakespeare (Romeo and Juliet)

Roses are the quintessential symbols of Love, Affection, and Beauty. As a token given to a fair lady to woo her heart, a rose is a sign of the pure, chaste nature of femininity. Besides, what girl can resist a bouquet of the enchanting flower? But what exactly does a rose and snake tattoo mean? In a word, Temptation. Such a tattoo signifies the loss of the Innocence and Beauty of a delicate flower at the hands of an intoxicatingly evil trickster. By extension, a rose and snake tattoo is a tip of the hat to the Temptation of Eve in the Garden of Eden.

Much like Dragons, Lions are distinctly masculine symbols of Primal Power and Strength. The Lion is the King of the Jungle and his impressive roar makes others tremble in their hooves. On the other hand, the slithering Snake is Mother Nature's thinker; he is the animal that's playing a mental game of chess when all others are still stuck learning how to play checkers, figuratively speaking. A Lion and Snake tattoo exemplifies the struggle between your animalistic and rational sides; Thought versus Action.

It isn't uncommon for Dragon and Snake Tattoos to be another interpretation of the Yin Yang symbol of balance. Dragons are Yang, the wild, passionate, and often fiery Sun persona that tends to have a definitively masculine essence. On the other hand, Snakes represent our Yin, the calm, cunning, rational nature of the Moon. Dragons act while Snakes think and together, they perfectly balance each other in the dance of Life.

Skulls are the epitome of Death and Decay; a grim reminder of man's mortality. The meaning that you derive from a Skull and Snake tattoo rests heavily on your cultural context. In Western societies, both images have come to symbolize the complete physical and spiritual destruction of a being. The image represents utter Decay and Death at the hands of a feared creature. However in other cultures, a snake is the embodiment of Healing and Rebirth. When paired with a symbol of mortality like a human skull, the image represents the cycle of Death and Rebirth, similar to the symbolism of the Ouroboros.

In its modern incarnation, the term snake eyes has been batted around bars and pool halls since the Roaring Twenties, but its roots can be traced to ancient Rome. Back then, throwing a Snake Eyes (a pip on each die) was known as a dog's throw and can symbolize good or evil depending on the context of the situation. Today, Snake Eyes are usually linked to betrayal and a Snake Eyes Tattoo is a tip of the hat to your inner rascal and devious trickster.

The right design can make the difference between a good tattoo and a show-stopping work of art. As such, it pays to invest the time and resources needed to create a piece that'll stand out. Think about what your new tattoo will symbolize, where it'll be placed on your body, and what other elements will you add to the overall design. Does it fit your style and personality? If you need inspiration, then our team of tattoo experts can help. Visit our design page at www.itattoodesigns.com and take advantage of our Custom Tattoo Service.