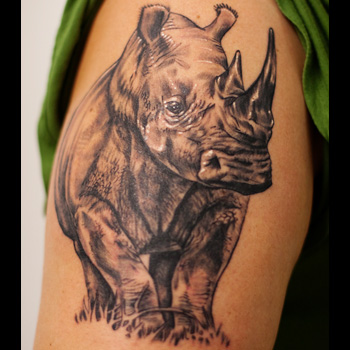 Tough, resilient, and powerful, rhinos are Mother Nature's armoured tanks. They've inspired fear and admiration in humans for thousands of years and have spawned numerous legends.

Part of their appeal lies in the fact that they are relatively uncommon in the wild, which adds to their mysterious persona. Rhinos are solitary creatures, which in the wild, is almost certain to be a dangerous way to live. The fact that rhinos do this with ease speaks to their tough nature and keen survival instincts. Simply put, don't mess with a rhino or a person wearing a Rhino Tattoo!

Rhinos were initially mistaken for unicorns by the ancient Greeks. After the Greek historian Ctesias described his encounter with the Indian rhino, his audience falsely assumed that he was describing the mythical unicorn. A rhino's horn was often sold as the horn of a unicorn in Europe up until the 18th century.

Rhinos also have a place in religion and mysticism. The Rhinoceros Sutra in Buddhism states that in order to reach enlightenment one should wander like the rhino so as not to give in to violent inklings and do harm to another living being. In medieval Nepal, rhino horns were used to make kukri knife handles which were believed to ward off evil.

Whether you love Rhino Tattoos for the powerful imagery that they evoke or their connection with Buddhism, you can't deny the animal's awe-inspiring beauty and strength.

The Meaning of Rhino Tattoos

After observing these majestic animals in the wild, humans have associated a number of traits and characteristics to the Rhino. They have come to embody:

Whether you want a tattoo of a rare white rhino or would like to incorporate any number of elements into your Jungle Tattoo, Rhino Tattoos come in all shape, size, and colours. Any number of design features can be added to change the meaning of your body art. Popular Rhino Tattoos include:

The Rhino is closely linked to the natural element, Earth. The ground represents Stability and Strength, two traits that are inseparable from the classic image of the rhino. Tribal patterns in general have deep connections with the spiritual realm, so Tribal Rhino Tattoos symbolize your strong, well-connected roots with Mother Nature. Having such a tattoo shows that you identify with the rhino's power, confidence, and unbelievable strength.

Rhinos may be powerful animals in the natural world, but a funny tattoo that features a cartoon rhino is nothing short of a comical masterpiece. Depicting this strong, seemingly invincible animal as a light-hearted image makes the rhino seem less threatening. A Cartoon Rhino Tattoo is a great way to show that despite your outer strength and powerful persona, you're really a kid at heart.

When choosing the right tattoo design, there are three important things to ask yourself:
Does your new tattoo fit your style and personality?
Where will it be placed on your body?
Will you combine it with other elements?


If you need inspiration, then take advantage of our Custom Design Service by visiting our design page at www.itattoodesigns.com. Our team can design a truly unique piece for you.