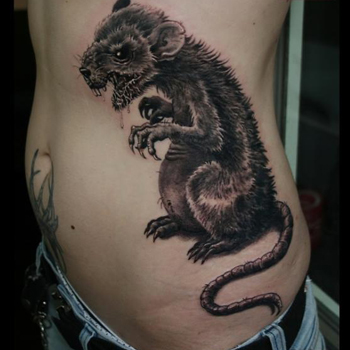 In the Western culture, no other animal is immediately condemned and subjected to persecution like the Rat. It has earn a bad name, but is this due to its own actions?

During the Dark Ages, rats helped ignite an epidemic that wiped out a third of the human population. The dreaded Bubonic plague or Black Death had such a global impact, that many people thought that the world was surely coming to an end. Since then, rodents are often viewed as parasitic, immoral, and unclean creatures that should be cast from normal society. It is with the backdrop of the Black Death that the fairytale The Pied Piper was written. Even our language has changed to reflect our views on rats.

"Don't be a rat fink by ratting out your friends. After all, nobody likes a rat!"

However, the situation is much different in other parts of the world. In Asia, rats are seen as industrious and clever little creatures that bring Fortune and Prosperity to those they encounter. Being born in the Year of the Rat means that you are destined to be a successful, energetic, witty, and charming person with great health and lifelong friendships.

Ancient Egyptians and Greeks believed that the Rat conveyed Wisdom and Bravery. Herodotus recounted several tales in which rats acted as advisors to the king and saved the nation from defeat on the battlefield. For the Hindus, the god Ganesha overcomes obstacles and trials with the help of his trusty rat. As such, rats are revered in parts of India. In fact, worshippers at the Karni Mata temple bring offerings of milk and food to their rodent deities. The most devout pilgrims frequently dine with the rats in order to receive their blessings.

Given the Western point of view on rats, it's doubtful that many persons will be splitting their Apple Raisin Quiche with these little rascals anytime soon.

The Meaning of Rat Tattoos

Depending on the region in which you live, Rat Tattoos can represent a variety of meanings. In general, rats embody:

Rat Tattoos are rather hard to find, since most persons (especially in Western cultures) aren't quick to associate with the general negative image of the animal.

For those who do, the most common designs highlight the defiant or sweet nature of these rascals. They can be depicted as cartoons making obscene gestures or any element can be incorporated into the artwork to show off the rat's innocent, yet jovial side. If you are willing to overlook centuries of rodent misrepresentation, a Cartoon Rat Tattoo is a great way to show your rebellious, yet comical nature and let everyone know that you aren't a push over.

When choosing the right tattoo design, keep in mind a few important things. First, you should get a tattoo that has special significance to you. Having a piece that speaks to your personality ensures that you'll wear your new tat with pride 20 years from now. Next, you need to think about where you'll place your new ink and lastly, decide whether or not you'll add other elements to the design. If you need some inspiration, then visit our design page at www.itattoodesigns.com and take advantage of our Custom Service.