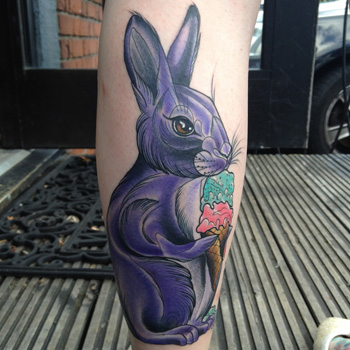 Rabbits are more than those adorable little animals that we've all come to love as children. In many cultures, the rabbit is an animal of the Moon, and is a symbol of Virility and Fertility. Anglo-Saxon mythology has it that the goddess, Ostara, often appeared as a white rabbit. She would lay colourful eggs during the annual spring fertility festivals in ancient Britain, which were subsequently offered to the children in the village. The practice continues to this day and is the origin of the Easter Bunny tradition.

Rabbits are notoriously cunning tricksters, who overcome obstacles through sheer wit, cunning, and of course, a bit of luck. The famous Br'er Rabbit tales of the American South are a hybrid of Cherokee and West African traditions that recount the exploits of clever characters outsmarting various animals. It's no surprise that the legendary Bugs Bunny was a precocious trickster.

In the Christian tradition, a rabbit's foot has become synonymous with Prosperity and Luck. This wasn't the case in the beginning. When Christianity first spread throughout pagan regions in Europe, early Christians often demonized pagan symbols, like the rabbit. This was a massive public relations campaign, designed to assert the dominance and power of their religion over all others.

Back then, seeing a rabbit was equivalent to having a black cat cross your path and was often associated with evil witches. To counteract the omen, a rabbit with special traits had to be killed in a particular manner by a hunter with equally odd characteristics. The rabbit's foot was then removed and kept as a lucky charm.

The Meaning of Rabbit Tattoos

Throughout history, the image of a rabbit has been used to represent a variety of characteristics, including:

Whether you associate with the spiritual virtues of a white rabbit, the cunning and wit of Bugs Bunny, or the raunchy sexuality of the Playboy bunny, rabbit tattoos come in all shapes, sizes, and incorporate any number of different elements.
Popular variations of Rabbit tattoo designs include:

Hugh Hefner didn't choose this insignia for his Playboy Empire by chance. Throughout history, rabbits have been linked with Fertility, Virility, and Sex, especially in the Anglo-Saxon tradition. They have a reputation for being randy little creatures and the wild abandonment with which they mate, made many persons in the ancient world believe that sex drove rabbits mad. Oddly enough, a White Rabbit is a symbol of Purity and Chastity. Hugh Hefner's black rabbit may have been originally designed to be a slap in the face of the "virginal values" of a White Rabbit.

In the Celtic tradition, rabbits have a strong connection with the spiritual world. They were believed to be messengers of the gods and their tendency to burrow was a way for them to better communicate with the spirits. Rabbits were even believed to be a liaison between humans and fairies. Wearing a Celtic Rabbit tattoo symbolizes your strong connection with Nature and the Celtic tradition, as well as deep rooted Spirituality.

The most popular tribal patterns for tattoos originate from the Polynesian, Haida, and Native American traditions. While each culture associates different meanings to the individual patterns, these designs are often linked with Spirituality and Nature. The Rabbit is one of the prominent symbols of Paganism, so a Tribal Rabbit tattoo represents your strong, spiritual connection to the natural elements.

The White Rabbit is one of the memorable characters from Lewis Carroll's Alice in Wonderland (1865). Generally, the White Rabbit plays the role of a guide; in The Matrix (1999), Neo symbolically "followed the white rabbit" to find the truth about the world around him. These tattoos symbolize the need for discovery and finding the truth.
According the traditions from the Renaissance era, these animals also represent Chastity. It wasn't uncommon include images of white rabbits into many paintings of the Madonna and Child as a way to reinforce the concept of her virginal purity. The Virgin Mary is often depicted touching a white rabbit or having one at her feet.

Most rabbit designs feature beloved cartoon characters and bring back to memories of our childhood (like Bugs Bunny!). Persons usually have tattoos of the characters that they most readily identify with; if you have the naughty personality of a trickster, then Bugs is your bunny. Others connect with the curious nature of innocent Peter Rabbit, while ambitious individuals can relate to the Velveteen Rabbit's desire to aspire to achieve greater things. Of course, the most memorable cartoon rabbit isn't actually a rabbit. Voluptuous vixens identify with the sultry seductress Jessica Rabbit from the movie Who Framed Roger Rabbit? (1988). After all, 'she's not bad; she's just drawn that way'.


The right tattoo design can make all the difference between having a fantastic artwork and being saddled with a piece that evokes emotions of shame and regret. Before putting needle to skin, think about what your new tattoo will symbolize and where it'll be placed on your body. If you need some inspiration, then visit our design page at www.itattoodesigns.com or take advantage of our Custom Design Service. Our team can design a truly unique piece that's perfect for you.