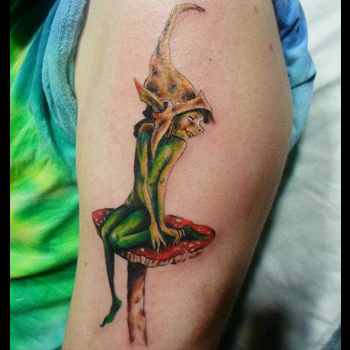 Like Fairies, Pixies originated from the Celtic tradition. It is believed that the Picts tribes of Eastern and Northern Scotland may have been the inspiration for these tales. The Picts were known to tattoo their skins with a bright blue dye and in fairytales, pixies are often described as small, magical creatures with blue skin. The word pixie is believed to be derived from the Latin word picti which means 'painted people'.

The difference between Pixies and Fairies


Pixies and fairies are thought to be interchangeable, but there are differences between the two:


The Meaning of Pixie Tattoo Designs

A pixie tattoo is for the mischievous minx who loves to show off her playful side. Free-spirited women often see themselves as pixies and the popularity of these tattoos has been boosted by the celebrities like Kat Von D and Amber 'Pixie' Acia Acia of LA Ink who proudly sport their tats. According to folklore, pixies are magical creatures that embody:

Since fairies and pixies are so similar, most of the same elements are used in both tattoo designs, though the meanings vary slightly. The mischievous and defiant nature of the creatures mean that pixie tattoos tend to have a more rebellious character.

According to legend, pixies are jovial creatures who won't pass up a chance to bust a move. As such, many pixie tattoo designs feature these little creatures playing instruments and having a great time. These tattoos are the ultimate salute to your frivolous and playful nature, symbolizing Freedom, Youth, and Mischief.

Tattoos with pixies and butterflies symbolize a bond with Nature, Rebirth, Growth, and Transformation. Sometimes the pixie is given the wings of the butterfly to symbolize Freedom and the need to explore.

Gothic Pixie tattoo designs have pixies that look tormented and often incorporate gothic elements like blood and skulls. The pixies in these pieces are usually dressed in purple or black to give a beautiful contrast to the pixie's blue skin while maintaining its Goth undertones. Gothic Pixie tattoos usually symbolize Anger and Defiance.

Pixies are like imps - they are the ultimate practical jokers - so it's no surprise that there are tons of Evil Pixie tattoo designs. Like Gothic Pixie tattoos, these designs are peppered with features that symbolize Anger and Defiance, but some designs have hints of Mischief. Puck from Shakespeare's A Midnight Summer's Dream is a perfect example of a pixie who's up to no good.

The spiritual significance of Tribal tattoo designs give pieces with pixies an element of Spirituality that isn't otherwise associated with pixies. Tribal Pixie tattoos symbolize a connection to Nature, a particular culture, or family. Sometimes, the outlines of the tribal patterns resemble flames. In this case, pixies tattoos with tribal patterns can also be a reference to Defiance, Independence, and Rebellion.

Celtic Pixie tattoos hark back to the origin of these legendary beings and is rooted in a connection with Mother Earth. According to legend, pixies are always found near places with ancestral ties, so a Celtic Pixie tattoo design is a nod to your ancestry and the ties that bind.

Like peas in a pod, pixies and Nature go hand in hand. Most pixie tattoo designs feature pixies sitting on (or around) mushrooms, flowers, butterflies, dragons, or stars. The meaning of the artwork varies depending on the elements in the piece. A pixie on a star represents Freedom, Magic, and the fulfilment of desires (ever heard of Pixie Dust?), while a flower is a symbol of a connection to Nature and Growth.

According to legend, pixies spend their days eating pollen and tending to the beautiful flowers of unsuspecting human gardeners. In fact, the flower prince in Hans Christian Andersen's Thumbelina is believed to be a pixie. The meaning of a Pixie tattoo design various depending on the flower being shown (Sunflowers, Daisies, Lilies, etc.) and symbolizes Frivolity and Playfulness, Love, Longevity, Warmth, Purity, Mischief, Youth, Motherhood, and a deep connection with Nature.

Although pixies and fairies share the same history and many of the same symbols, there are differences between the two. Generally, pixies are more strongly linked to Discord and Mischief than fairies. Fairy Pixie tattoos evoke a blend of Mischief, Innocence, and Youth.

A pixie that resembles an alien? A Snookie Pixie? Popular culture has a strong impact on tattoo designs. These customized tattoos have specific elements that are significant to the wearer, such as a reminder of a special event or person.

Regardless of your reasons for getting a pixie tattoo, you can get inspiration for your artwork design from anywhere, whether it's from a historical book or a crazy reality TV show. The most important thing is that you take the time to create a design that fits your personality. You want to glow with pride in 20 years when you look at your artwork, not hang your head in shame after 20 minutes. If you need some inspiration, then visit our design page at www.itattoodesigns.com or take advantage of our Custom Design Service and our team can create your unique masterpiece.