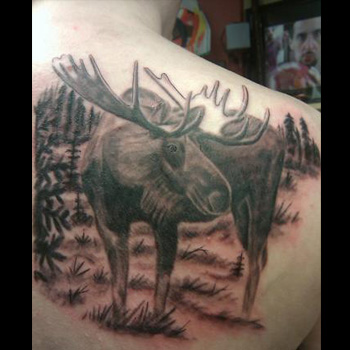 The majestic moose has been travelling the plains of North America and central Europe since the Stone Age. They were the inspiration for many of mankind's early cave drawings and are integral characters in countless folklore legends across North America and colder climes in continental Europe.

Moose is also known as 'Elk' in British English. The word 'moose' is actually derived from the Native American word moosu, which, according to some sources, means he strips. The Moose is an animal of contradictions; it is awkward and uncoordinated, but its jerky movements have a beauty and elegance about them that is hard to deny. Despite the animal's huge size, it can move almost undetected through the forest and its highly tuned senses makes it a tough quarry for hunters.

The animal's gender greatly affects the spiritual symbols attached to it. Females (known as cows) are viewed as nurturing mothers that are willing to lay down their lives to protect their young. On the other hand, males (known as bulls) are seen as prime examples of masculine prowess and virility. On a whole, moose are seen as wise totems and are often depicted in media and culture as guide or leader of some sort.

The Meaning of Moose Tattoos

Moose Tattoos are often used to symbolize a variety of characteristics, including:

Although the artistic elements that you choose to incorporate into your tattoo design are entirely based on your style and personality, it isn't uncommon for persons rocking Moose Tattoos to use features that highlight the animal's powerful persona and strength. Your Moose Tattoo can come in a variety of colours, but most persons tend to stick to tried and true natural hues like brown, black, or grey. Popular Moose Tattoos include:

The Haida and other Native American tribes of the Alaskan and Canadian territories have always had great respect and reverence for The Mighty Moose. In fact, it's hard to think about Canada without picturing the quintessential image of a dominant bull with massive antlers stretching to the sky. Most Tribal moose tattoos are done in traditional Haida and Native American designs. These tattoos not only emphasize the powerful presence of these animals, but also show your respect for culture from whence the patterns originate.

One of the most enduring symbols of dominance and power are the impressive antlers of the Moose or Deer. These feats of nature can grow to six feet in width and pack quite a punch when it comes to fighting for territory or mates. Moose antler tattoos are great ways to display your strength and powerful, masculine persona.

About eleven thousand years ago, the legendary Irish Elk roamed the forest of Èire. Its descendants have spawned Celtic myths and fuelled folklore that are still alive in Ireland today. Celtic moose tattoos pay homage to the power of these beautiful beasts and show your deep connection with the Irish culture and Mother Nature.

Whether you remember happy days of watching Rocky and Bullwinkle or love the new school antics of Scoutmaster Lumpus in Camp Lazlo, moose characters in popular cartoons have always brought us to place of innocence and fond childhood memories. No matter what your style is, a cartoon moose tattoo is a barrel of nostalgic laughs for everyone.

Choosing the right tattoo design is tricky, as such, it's best to think about what your new tattoo will symbolize and where it'll be placed on your body. Will you combine it with other elements or let it remain alone? If you need inspiration, we can help. Visit our design page at www.itattoodesigns.com and take advantage of our Custom Design Service.