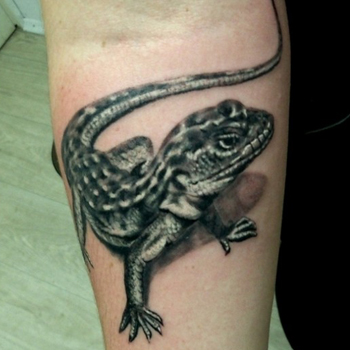 The blood curling scream of a frightened person is usually the first sign that a lizard is nearby. Of all the reptiles on the planet, Lizards and Snakes top most people's "I'm scared to death of them" lists. But these small animals are more terrified of us than we are of them. Is our immense fear of these tiny creatures really justified?

You'll be surprised to know that lizards have had an important place in human history for thousands of years. The ancient Moche people of northern Peru and several Aboriginal tribes held lizards in high esteem and often included their image in countless pieces of iconic artwork. The Greeks and Egyptians associated good fortune and wisdom with these little reptiles and the Egyptian hieroglyphic for 'Abundance' and 'Wealth' is a symbol that bears a striking resemblance to a lizard.

In certain parts of West Africa, the image of lizards are carved into the walls of houses to ward off evil spirits and bring peace and happiness to the household. The sixth century pope,  St. Gregory the Great,  was fascinated by the countless hours that lizards spent basking in the warmth of the sun. He likened the act to a "humble soul seeking enlightenment".

Lizards have even influenced human language and emotions to a much larger extent than previously believed. The term lizard brain is a reference to the primitive instincts of humans and describes a school of thought among leading scientists. To have a lizard brain means that our higher cognitive functions that relate to art, poetry, and even designing great tattoos give way to our most primal instincts of reproduction, food, and survival. A lizard brain acknowledges the part of us that is concerned with danger, our gut feelings, and deep rooted aggression. No wonder Dexter Morgan from the popular Showtime series, Dexter, has a hard time overcoming his need to yield to the lizard brain of his 'Dark Passenger'.

How or why this school of thought came about may be a matter of observing the awe inspiring power of the most fearsome lizards, the Komodo Dragon. The Komodo Dragon is a formidable carnivore that has been rumored to occasionally dine on people. Residents of the Indonesian islands on which they are found have developed a healthy respect for these powerful and deadly animals. Komodos were first referred to as 'Land Crocodiles' by early European visitors to the region and after countless years of being hunted due to fear, sport, or as popular attractions in zoos, Komodos are now classed as a vulnerable species that may soon disappear from the pages of history.

Whether you identify with the primitive animal lurking deep inside or the cunning and agile humble soul on the path to enlightenment, Lizard Tattoos are a great way to show the depth and complexity of your multi-dimensional personality.

The Meaning of Lizard Tattoo Designs

Tattoos of lizards are a great way to express any number of personality traits and deep symbolisms. The Lizard embodies:


Lizard Tattoos are most attractive when the animal is shown curled and contorted into shapes, that way, the sleek look of the design is highlighted. The most creative pieces are those that are placed at a location on your body that gives the illusion of a moving tattoo. This requires a bit of knowledge about human anatomy in order to make the tattoo come alive and the illusion look flawless.
Popular lizard Tattoo variations include:

Tribal markings form part of the cultural cornerstone for countless indigenous peoples the world over. They are a means of expressing your cultural or regional identity and communicating with the spirits of your ancestors. From the Haida people to the indigenous Polynesians, a Tribal Tattoo with a lizard animal totem is also an extension of this concept. Lizards are associated with the Spiritual, as such, a Tribal Lizard Tattoo is a tip of the hat to your spiritual and cultural identity.

Salamanders have a long history with humanity. From as early as the first century A.D., Pliny the Elder wove tales of the extraordinary beauty of these fiery creatures. Throughout literature, Salamanders have been closely associated with elemental fire. Leonardo da Vinci wrote that the Salamander "has no digestive organs, and gets no food but from the fire, in which it constantly renews its scaly skin... in the fire,—for virtue." A Salamander Tattoo represents your passionate nature and your ability to pull through difficult situations relatively unscathed.

With a Gecko Tattoo, you can do more than just save on your car insurance by switching to Geico; you can bring new opportunities in your life. Geckos are famous for their climbing skills, adapting easily to any surface or circumstance. This adaptability, and their ability to regenerate lost or damaged body parts, has linked the Gecko with traits like Renewal, Agility, and Cunning. Are you a gecko at heart?

Iguanas are native to Mexico, Central America, and the Caribbean, with small population pockets in parts of Polynesia. The name is a Spanish derivative of their Taino name, 'iwana' and is the inspiration behind the names of various towns and suburbs (like Liguanea in Kingston, Jamaica) across the Caribbean and Central America. In fact, they are appetizing treats on some islands in the Eastern Caribbean, with iguana connoisseurs reporting that the only way to truly enjoy the lizards succulent taste is to cook it in a hearty curry sauce. Iguanas are known for being playful and are often associated with Patience, Creativity, and Understanding.

While we'll never figure out what inspired Culture Club to make their smash hit Karma Chameleon, one thing is clear, Chameleons aren't your 'run of the mill' reptiles. Their ability to camouflage and blend seamlessly with their surroundings is a testament to their adaptability and keen survival instincts. A Chameleon Tattoo represents your ability to adjust to whatever circumstance life throws your way.


Designing your perfect tattoo requires you to think long and hard about a few factors. What your new design will symbolize? Where will it be placed on your body? Does it fit your general style and personality? Will you combine it with other elements? Choosing the right tattoo design can be a difficult endeavor, but you don't have to struggle through the process alone. Our team of experienced tattoo artists can help you create a truly unique piece of body art. Simply visit our design page at www.itattoodesigns.com and take advantage of our Custom Design Service.