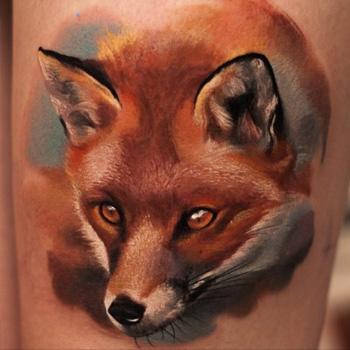 Quick quiz - what comes to your mind when you see or hear the word 'fox'? Sex? Intelligence? A Trickster? A sexy Vixen? In human society, foxes represent all these traits and more, but have you ever stopped to wonder why we respect these animals for their minds and not their muscles?

Like the Coyote, the Fox has a reputation for being a clever trickster. The word 'shenanigan' is believed to be derived from the Irish phrase 'sionnachuighim' which means I play the fox. The Dogon people of Mali see the Fox as a clever trickster that has remarkably thrived in the harsh desert thanks to its wit and intelligence. In the European context, it's no wonder why many of Aesop's famous fables feature the mentally astute fox that is always able to turn any situation to its advantage. To the Greeks, the Teumessian Fox was so clever, that the animal destined never to be caught. In the Middle Ages, Reynard the Fox was a popular figure in children's stories that spent his days outfoxing those around him. To this day, Reynard is still a childhood favorite for kids across Europe. Even Judaism and Christianity make reference to the fox. In Ezekiel 13:4, false prophets are likened to foxes and they are rebuffed for not having earned the right to speak in the name of the Lord.

The Fox became known for its wisdom and mental strength. To the Moche people of ancient Peru, the Fox was a fierce warrior, not because of its physical strength, but because of its ability to master the mind. The Fox is a symbol of psychological warfare and outfoxing a fox was believed to be a sign that you had the mental fortitude to withstand any challenge. This idea is also seen throughout Finnish mythology. The image of the Fox was, and still is, used to teach children that cunning and wit can be used to overcome even the most difficult obstacles in life.

In the Native American context, foxes are seen as master survivalists. Many cultures speak of the fox's ability to shape-shift and adapt to any circumstance, earning it a reputation for being a revered creature of the land. It is the constant companion of the Coyote, but the Fox had the tendency to be a bit of a mooch, stealing food from his dear friend. This is in sharp contrast to the animal's reputation as an industrious being. The Tswana people of Botswana speak highly of the noble fox who isn't afraid to get muddy in the pursuit of his dreams. For them, the Fox does what needs to be done, regardless of the circumstances.

It is also an animal infused with the primal magic of Earth and Mother Nature, as such, it is a provider and caregiver. In Achomawi folklore, the Fox and the Coyote are the co-creators of the Earth. The Apaches believe that the Fox stole the gift of fire and brought it to the people and the Choctaw Indians see the Fox as a symbol of Family and Unity.

Many early European and Asian cultures viewed foxes as totems of Fertility and Prosperity. For the Shinto goddess of Food and Rice, Inari, foxes are her messengers and farmers across much of China, Japan, and Korea still leave offerings to foxes in the hope of winning favor from Inari and having a good harvest. The Japanese see these beautiful animals as extensions of the rain spirits that give life-giving water to the world.

Foxes were often depicted as being feminine creatures and seductive temptresses, which accounts for their association with Femininity. It's no coincidence that a female fox and a sexy woman are both called a 'vixen' and why we say that an attractive woman is 'foxy'. Foxes were also the messengers for the Mesopotamian Mother goddess, Ninhursag, and it was her milk that nourished the great Sumerian kings. There is an Inuit story about a fox that shape-shifter into a beautiful woman to seduce and trick a fierce hunter to marry her. After the hunter fell madly in love with his wonderful wife, she returned to her true nature and left him. As a result, the hunter stopped preying on foxes for fear that he would kill his beloved wife.

For the Celts, foxes were revered for their ability to navigate the thick undergrowth of the Celtic forests and, because they were only seen at the time of day known as the Between Time, they were seen as guides to the spiritual realm and the land of the Faeries. To this day, many cultures believe that the spirits of their ancestors roam the world at dawn and dusk (the Between Time) and that animals that most visible during these sacred hours act as guides for the dead. In an effort to commune with the natural elements, foxes shape-shifted into witches and vice versa, as such, they were important symbols in the pagan world.

Sadly, with the dawn of Christianity in Europe, pagan symbols were regarded as emblems of the Devil and many foxes were hunted and burned in an effort to rid the world of the Devil's soldiers. It is highly possible that the tradition of fox hunting may have been born out of this belief. Although the practice of hunting prey with dogs dates back to ancient Egypt and Babylon, in Celtic Britain, preying on foxes was considered to be blasphemous and sacrilegious. However, by medieval times, Christianity had taken a firm hold in Europe and foxes were reduced to the realm of lowly animals and prime targets for hunters. In modern times, the tradition is seen as being barbaric and there have been increasing calls to end the practice.

Very few animals have had a long and complex history with humanity like the Fox. It is both a being of spiritual significance and a fashion statement for Parisian and Italian runways. It is not only an animal with a rich history, but also one a bright future that reminds us to be creative and encourages us to see Nature with fresh new eyes.

The Meaning of Fox Tattoos

Foxes have become the embodiment of a variety of human traits, including:

Although Fox Tattoos come in a variety of sizes and colors, they very rarely depict the animal in a position of power. That is because, in many cultures, foxes are respected for their mental abilities and keen survival instincts. To outfox a fox is a sign of your mental superiority; they are almost always never seen as animals that will tear you to shreds, but rather as animals that can outwit you.

Of all the physical features of a fox, the most prized is its tail. In fact, the stem word from which the word 'fox' is derived is from a Proto-Indo-European word puḱ which was used to refer to the animal's tail. Even the Welsh word for fox, llwynog, pays homage to the animal's bushy tail. The Nine-tailed Fox legend isn't something that anime cartoons, like Naruto, cooked up overnight. Although the legend originated in India, with the migration of Buddhist monks, the tale of the Nine-tailed Fox became a symbol for the Japanese goddess of Fertility and Prosperity, Inari. Foxes, known as Kitsune (Japan), Kimiho (Korea), and Huli jing (China), are believed to be Inari's messengers who are masters of transformation and trickery with the ability to possess peoples' souls. As the Kitusne age, they become stronger, wiser, more powerful, and grow an additional tail. Legend has it, that Kitsune over the age of 1000 years have nine tails and undergo a transformation in which their fur become silver, white, or gold, and they gain infinite wisdom. Nine-tail Fox Tattoos pay homage to this Japanese legend and represent Wisdom, Intelligence, Cunning, and closeness with the spiritual world.

Foxes appear in many cultures, as such, the meaning associated with tribal depictions of foxes can vary significantly. For the most part, in many indigenous cultures across North America, Asia, and Europe, the Fox is an ancient symbol of Wisdom, Trickery, Intelligence, and Mysticism. Tribal Fox Tattoos are usually done in indigenous regions with the belief that doing so will infuse tribe and community members with the spiritual powers of these animal totems. Depending on the style of the image, Tribal Fox Tattoos represent your link with a particular culture and pay homage to the mental ability and keen survival skills of these adaptable animals.

Red foxes are, by far, the most popular animals in the fox world. Many of our folklore stories and traditions speak of the Red Fox with high regard or utter mistrust. Many of the urban legends and traditional folklores refer to the Red Fox and it is their image that springs to mind when most people talk about the animal. When it comes to animal pelts, the Red Fox is one of the most valuable pelts in the fashion industry. The Red Fox is an odd combination of a trickster, a fashionista, a sexy vixen, and a spiritual leader rolled into one, as such, it is the context or feel of the tattoo that tells you which trait the artist is trying to represent. A Red Fox Tattoo with a curvy vixen speaks to your Femininity and Sexuality and is an expression of your passionate, fiery nature, whereas one with a running fox or elements that depict sunrise and/or sunset (known as the Between Times) makes reference to the spiritual world and the Fox is seen as a spiritual guide.

If you are a free spirited trickster at heart, then a great Fox Tattoo can channel your wayward personality. When it comes to your design, the sky is the only limit to your vast imagination, so dream big! Bear in mind that each element added to the design changes the overall meaning of the piece, so be sure to think careful about the message that you're trying to send to the world with your piece and where your new artwork will be placed on your body. Tattoos are more than just ink sketches on skin; they are the embodiment of your personality, style, and personal life experiences. Creating a unique design can be a daunting task, but if you need help, our team of artists is more than happy to lend a hand. Visit our design page at www.itattoodesigns.com and take advantage of our Custom Design Service.