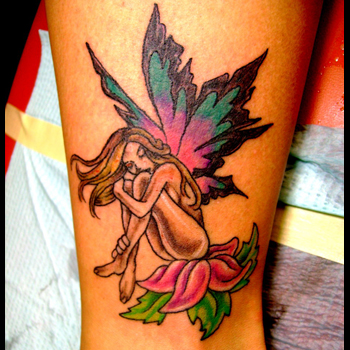 Nowadays, whenever we think of the word 'Fairy', images of Tinkerbell, Thumbelina, and Pan's Labyrinth spring to mind, but the legend of the Fairy has been around since the days of the Celts. 'Fairy' comes from the Latin word 'fata', which means 'Fate' and originally referred to any magical being from the land of Faes, including gnomes, elves, and trolls.

Tales of fairies (yes, that's how we got the term 'fairytales') came from Western European folklore (the British Isles) and eventually spread to Germany, where they were popularized by authors like the Brothers Grimm. Fairies were believed to be fallen angels or demons who fulfilled the wishes and desires of humans while thriving on making mischief. These spritely spirits are a contradiction of characteristics. They are both demure and immodest, obedient and defiant, innocent and mischievous. This mix of personalities may be the reason for the popularity of fairy tattoos.

The Meaning of Fairy Tattoo Designs

Tattoos of fairies are usually brightly coloured and popular among women since they more readily connect with the artwork's meaning andsymbolism. According to folklore, fairies are magical creatures that embody:

Fairy tattoos are sometimes combined with religious symbols like crosses or stars, as well as elements of Nature (like mushrooms and flowers) which is a tip of the hat to the spiritual connection associated with these mythical creatures and a way to change the meaning tattoo for the wearer. Popular variations of fairy tattoo designs include:

Fairy tattoos are sometimes blended with Japanese traditions to create these fusion tattoos. Anime and Manga characters blend modesty and subtle sensuality. Anime Fairy tattoos hint to delicate Femininity and a generally demure personality, but some persons add elements of Mischief and Frivolity to give their tattoo spunk and a "Nice, but a little Naughty' vibe.

Butterfly tattoos symbolize Nature and Innocence and, when paired with fairies, they represent Beauty, Grace, and Freedom. Butterfly Fairy tattoo designs embody Rebirth and Transformation, since a butterfly undergoes a phase of metamorphosis during its life.

A sweet fairy with a gothic twist. Gothic fairy tattoo designs combine Innocence and Youth with dark undertones (some occasionally incorporate skulls) and features dark fairies with anguished and tortured expressions. Gothic Fairies usually symbolize the loss of Innocence. When the fairies in the design have defiant poses, this embodies Strength and Power in the face of adversity.

In some cultures, evil fairies are imps that create chaos by stealing babies and destroying harvests. Evil Fairy tattoo designs sometimes have hints of Innocence (like an apple), which hark back to folklore legends like Loki, the serpent in the biblical story of the Garden of Eden and many others.

Tribal tattoo designs from various parts of the world, including South America, Africa, Polynesia, and North America, have spiritual significance in their native regions. When combined with a fairy, a tribal tattoo represents a fusion of the mythical folklores of seemingly different worlds. Nowadays, the true meaning of each tribal symbol has been lost, but Tribal Fairy tattoo designs generally embody Femininity and a connection to Nature, your ancestry, or a particular culture. They're usually black and white.

Like Gothic Fairies, Sad Fairy tattoos also represent a loss of Innocence. A crying fairy sitting on a flower or mushroom embodies a sadness over a broken connection to Nature or damaged bonds with a loved one. Wearing a Crying Fairy tattoo symbolizes loss and emotional pain as the fairy, who is normally a powerful feminine figure, has been hurt and weakened.

Photo courtesy of www.squidoo.com/fairy-tattoodesigns. Fairy Tattoos with Celtic influences are deeply rooted to Spirituality and Paganism. These Celtic tattoo designs usually include flowers, butterflies, or even dragons, which hark back to a connection with Mother Earth, the Elements, and Motherhood.

This is the most popular way to incorporate other features like mushrooms, flowers, butterflies, dragons, stars, clouds, The Moon, or The Sun. By blending different elements together, the meaning of the tattoo changes. A fairy on a mushroom or flower represents a connection to Nature, while a fairy on a cloud is a symbol of Freedom and Escapism. This design is also a great way to place several fairies into one piece, as the individual fairies can be seated or standing in frame of the artwork.

Tinkerbell tattoo designs are the classical images of fairies. Tinkerbell is mischievous, yet innately good, therefore this design symbolizes Youth, Frivolity, and Innocence. While some versions of Tinkerbell tattoos appear childlike, other incarnations are heavily influenced by Pin-up girl designs but without being overtly sensual.

Flowers are Nature's symbols of Femininity. Fairies are often shown sitting on, or playing with, flowers as a sign of Youth, Frivolity, and a connection with Nature. The type of flower in the artwork has significance and changes the overall meaning of the tattoo. Sunflowers symbolize Warmth, Energy, and Longevity, Daisies represent Innocence, Love, and Purity, while White Lilies are a sign of Youth and Motherhood.

A dragon is a symbol of the primal forces of Nature. They live in deep, dark caves (Earth), fly (Air), breathe fire (Fire) and, in the Japanese culture, are associated with Water. Dragons and fairies represent different expressions of Nature; dragons tend to be masculine and powerful, while fairies are delicate, feminine, and strong. In a sense, Dragon Fairy tattoos symbolize the male and female elements of Nature, which contradict, yet perfectly balance, each other.

Pixies and fairies share the same history and many of the same symbols and traits. In fact, both are often interchangeable with each other, but there are differences between the two. Fairy Pixie tattoos evoke images of Innocence, Frivolity, Mischief, and Youth.

Sometimes Fairy tattoo designs include pop culture elements. It's not uncommon to find a fairy that resembles an alien, one that is dressed in a 'Naughty Nurse' costume, or a fairy that has a Cupid tattoo design. All these have meanings that are more specific to the tattoo artist and tend to be in the realm of customized tattoos.
Choosing the right tattoo design is tricky, as such, it's best to think about what your new tat will symbolize and where it'll be placed on your body. Will you combine it with other elements or let it remain alone? Ask yourself, "What variation of the design best fits my personality?" The best ones are those that have significant meaning to you, since your new ink can't be erased with a Mr. Clean Magic Eraser. If you need some inspiration, then visit our design page at www.itattoodesigns.com or take advantage of our Custom Design Service, where our team can design a truly unique piece for you.