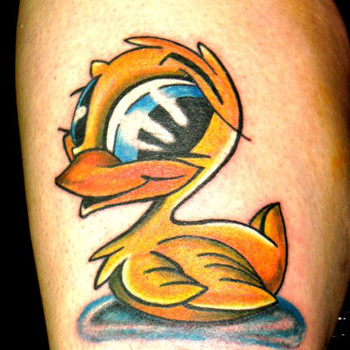 For most people, ducks bring to mind childhood television shows or scenic ponds, but the symbolism of the duck goes much deeper. Ducks are resourceful, being able to live on both land and water, and are also able to adapt and transition well, being migratory birds by nature. They can also escape their enemies through flying, swimming, or diving underwater, making them incredibly elusive and hard to catch.

Across the globe, cultures have seen ducks as important animals which represent important traits and attributes. For instance, Indian culture recognizes the duck as the symbol of the constant cycle of life. There, ducks appear at the end of the rice harvest to feast on the leftovers and also to lay their eggs: the cycle of birth is thus continued.

According to Celtic animal symbolism, ducks represent honesty, simplicity, sensitivity, and resourcefulness. The Celtic culture sees these wild birds as being equally beautiful and honest: they are adaptable creatures which are sensitive to their environments, and are graceful on both land and water.

The duck also has several meanings that transcend cultural boundaries. Those who study and interpret dreams believe that a duck showing up in a dream is a good omen, while for conservationists the duck is a symbol of one's commitment to the environment and the importance of preserving natural habitats for the successive generations to enjoy.

Specific kinds of ducks also have their own unique symbolism. For instance, the drake, or mallard, duck was considered to be a symbol of male fertility and promiscuity in medieval Europe, with some pagan cults using the drake as their symbol.

In recent popular culture, ducks have become the symbol of childhood in the form of rubber ducks and the famous cartoon characters Daffy Duck and Donald Duck. Many adults will likely have fond memories of these duck toys and personalities, and may thus choose the duck to document this time in their lives.

Hunting culture has also made use of duck symbolism. Many hunters employ a 'duck decoy', a painted wooden duck, to attract other ducks, knowing that the ducks are fond of company and are communal animals. Duck decoys are now actually popular household accessories in Canada and the American West, demonstrating both a respect for hunting culture and the community spirit of the duck.

The Meaning of Duck Tattoo Designs


Whether you see the duck as your personal animal spirit guide, a symbol of your culture, or the image of a favorite childhood cartoon character, there are several different meanings inherent in a duck tattoo. These include, but are by no means limited to:

Because ducks are symbolic animals in many cultures, a duck tattoo design can be created with a particular cultural style or flair in mind. Using styles or colors indicative of Celtic, Chinese, or Indian art can add another layer of meaning to the tattoo, demonstrating both personal traits and cultural heritage. 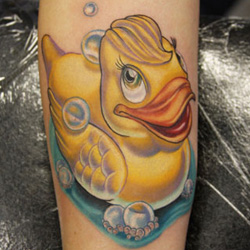 A favorite bath-time companion of many children, and the subject of the "Rubber Ducky Song" on the famous television show Sesame Street, rubber ducks are colorful and playful, smiling with delight as they bounce around in the water. Such a carefree animal is clearly recognizable as a symbol of childhood, reminiscent of days when things were simpler and the world full of possibilities.

Though seemingly basic in design, there are a few different variations on the rubber duck tattoo which will make it individual and unique to you. For moms and dads, getting a momma or papa rubber duck with a few rubber ducklings document your family's growth, and adding pink or blue ribbons to the ducks are a fun way to differentiate between the duckling children.

A great way to play with this symbol is to design a tattoo of a rubber duck with a twist. Though traditionally playful and innocuous, a rubber duck can be toughened up with devil horns, a malicious grin, or a threatening glare. Adding text can also amp up the meaning: for instance, a hardened-looking rubber duck with the words 'Sink or Swim' below it can demonstrate an individual's journey through a troubling childhood. 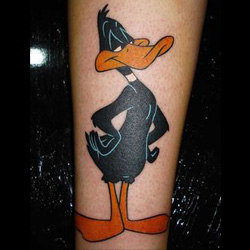 One of Looney Tunes' most famous characters, Daffy Duck is a popular tattoo with people of all ages. Sometimes friend and sometimes foe of Bugs Bunny, Daffy can be a bit of a zany, screwball character who is most often remembered for his slightly slobbering lisp when speaking. As a character, Daffy has gone through several phases in his animated career, ranging from crazy sidekick to outright villain, so consider which Daffy you'd like to adapt for your tattoo design.

Daffy first appeared in 1937, and he has played a number of different roles in the hundreds of cartoons and movies in which he appears. For instance, in the 1940s, Daffy was often in army gear and fighting off Nazis, while later depictions of the cartoon duck had him stepping into roles as 'Duck Tracy' (in imitation of Dick Tracy) and 'Stupor Duck' (a nod to Superman). Picking one of these characters to use for your Daffy Duck tattoo will bring a unique element to the design and ensure that no one's Daffy tattoo looks quite like yours! 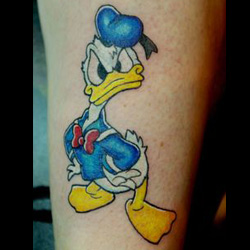 Donald can perhaps be accused of having a split personality - at times he is loyal, family-oriented, and heroic, but he can also be mischievous, selfish, and reckless. While Donald's standard outfit is a sailor shirt, cap, and tie, he never wears trousers, leading to some speculation as to his lack of modesty! But this outfit, as well as Daffy's facial expression, can be adapted and suited to your own unique design. Picking a Donald characterization to fit your own personality is a great design touch, and will ensure that your tattoo reflects which Donald you most relate to.

Donald also has a female counterpart, Daisy Duck, which might be more appealing for female fans of duck tattoos. Like Donald, Daisy can have a bit of a split personality: she is feisty, strong-willed, and quick to fight her corner, but also a loyal girlfriend to Donald and best friend to Minnie Mouse. She is also glamorous and playful, usually shown batting her long lashes and wearing a few jeweled accessories. Choosing fun and personalized clothing is a great way to make sure your Daisy Duck tattoo is one of a kind. 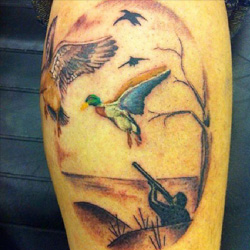 Many of the more realistic duck tattoo designs, as opposed to cartoon-based or more abstract designs utilizing the art style of a particular culture, come in the duck hunting subgenre. Ducks can be elusive prey for hunters, as they're able to swim, fly, and dive underwater as a means of escape, so getting a duck hunting tattoo can both demonstrate your love of hunting and also your determination to go after what you want. Placing a target symbol or gun scope image on the duck can further drive home this message of determination, demonstrating that you keep your eye on the prize no matter the distraction.

Hunting is also a favorite pastime for many people, and getting a duck hunting scene tattooed can remind you of the sense of freedom when exploring the outdoors, or memorialize a loved one that you once shared this pastime with. Including figures of a father and son, and hunter and his dog, or two friends can create a touching and personalized memorial to someone now gone.

Whether you are a fan of childhood cartoons or adventures in the great outdoors, duck tattoos are a great way to demonstrate your traits and characteristics in a unique design. As the symbols of loyalty, adaptability, and resourcefulness in cultures around the globe, having a duck tattoo marks you as a strong individual who is steadfast and resilient. For custom design of duck tattoo you can check our Custom Tattoo Page.