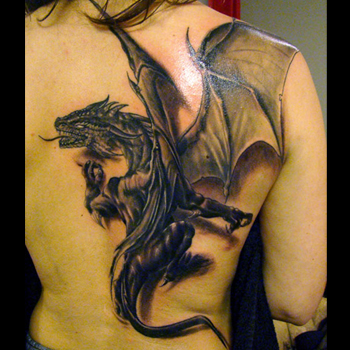 The word Dragon is derived from a Greek word which literally translates into 'huge serpent' and 'one who sees clearly', as well as the Latin word draconem (huge serpent). The creature has strong ties with several cultures worldwide, from European folklore and Middle Eastern mythologies to Asian influences.

In European folklore, dragons were seen as a evil creatures that had to be slain by a noble knight. Stories abound of the legends of dragon slayers and serpent killers like Beowulf, the Archangel Michael, and Tristan. Dragon folklore appear in Jewish and Christian in the form of a serpent and killing a dragon is often interpreted as defeating Satan.

Dragons are intricately woven into Asian culture. The meaning of each image varies, depending on the elements that are incorporated into the design. It is a Water animal and usually symbolizes the Sub-conscious and Mediation, as well as being a symbol of Masculinity, Strength, Power, and the primal forces of Nature and the Universe.

Dragon tattoo designs come in a variety of sizes - from the cute little Puff the Magic Dragon symbol on your ankle to the intricate full body, Samurai dragon tattoos of the Yakuza - and have enjoyed a surge in popularity thanks to blockbusters like The Girl with the Dragon Tattoo. These tattoo designs come in a variety of colors, including pink, purple, blue, black, red, and green.


The Meaning of Dragon Tattoo Designs

Dragon tattoos embody a variety of virtues and characteristics, including:

Dragon tattoos come in a plethora of styles which reflect how deeply entrenched they are in human folklore.

Dragons are one of the most revered creatures (mythical or otherwise) in Asian culture. Whether as a traditional Chinese Dragon or a Jade Dragon tattoo, these designs often symbolize Wisdom, Strength, Power, Longevity, Prosperity, and Good Luck. Asian dragons appear more like serpents winding their way through existence and lack the bat-wings that images of European dragons often contain. In the Japanese culture and several regions in the Orient, dragons are Water creatures and are thought of as good omens.

The Ouroboros is an ancient symbol that first appeared in an ancient Egypt funerary text found in Tutankhamen's tomb. It's also known as the Dragon Circle tattoo and symbolizes the cycle of life, something destroys itself while being renewed. The image appears in many western traditions, like the Norse and Greek mythologies, as well as Hindu, Aztec, West African, and South American cultures. People who wear this design usually identify with the cycle of Birth and Death and may have experienced a tragic loss at some point in the past.

Sometimes it's best to let sleeping dragons lie. Anyone who wears a Sleeping Dragon tattoo is showing the world that he is not to be trifled with. A sleeping dragon represents Strength and Power that remains dormant, ready to awaken when the right moment presents itself.

Gothic Dragon tattoos epitomize Power, Strength, and mankind's primal instincts. In these tattoo designs, the Dragon often has a defiant stance, as if he's ready to take on those who challenge his authority. Normally, people who wear this design are strong and fearless.

A Tribal Dragon tattoo is a great way to mix mythologies from various parts of the world. Tribal tattoos have spiritual significance and represent the strong ties of people with the region from which the design originates. When combined with the image of a dragon, this sends a powerful message that the wearer has a deep connection with Nature and a particular culture.

The image of a dragon rising up into the Sun is a symbol for Ascension and Progress. This tattoo is often worn by persons who have overcome adversity and feel as if their life is progressing.

In Chinese culture, the Dragon represents Yang and the Phoenix, Yin. Yang symbolizes the masculine forces that are passionate and untamed like the Sun (white half), whereas Yin is the calmer, more rational persona that corresponds to the Moon (black half). These designs are sometimes known as Dragon Phoenix Tattoos.

Most images of dragons and snakes show them as mortal enemies, although they are intricately linked in mythology and origin. There are, however, several differences between the two; snakes are associated with Healing and the God of Medicine, Asclepius, while dragons are driven by the primal forces of Nature and the natural elements. In a sense, Dragon and Snake tattoos symbolize the conflict between Science and Superstition, the Modern versus the Traditional.

In Chinese folklore, the tiger and the dragon are mortal enemies and are often depicted battling each other. While both represent elements of Nature, Passion, Strength, and Power, they have different ways of interacting with the primal forces. The Dragon has an element of Wisdom, and focuses on understanding the fundamentals of the world, whereas the Tiger relies on brute strength. Brains over Brawn, if you will.

A dragon is a symbol of Nature; they live in dark caves (Earth) or lakes (Water), fly (Air), and breathe Fire. Dragons tend to be masculine and powerful, while fairies are delicate, feminine, and strong. Dragon Fairy tattoos represent the contradictory and complementary forces of the Male and Female elements in Nature.

A dragon is represents masculine Power and Strength, whereas a butterfly symbolizes feminine beauty and Innocence; it is a sign of the fairer sex. Wearing this tattoo design means that the wearer identifies with how the two forces seem to balance and complement each other.

A Dragon's claw symbolizes destruction and conquest over evil. It is a sign of Power and Fearlessness, and is worn by persons who consider themselves strong, dominant, and unmoved by challenges.

The elements of this tattoo have a strong connection with the Orient, in particular Japan. The Koi fish is brave, strong, and able to face even the most dire situation without any sign of fear. According to Chinese folklore, if a Koi managed to swim upstream and climbed the daunting falls at Dragon's Gate (on the Yellow River), it would be transformed into a dragon. A Koi Dragon tattoo represents Ambition and progress through hard work, since the Koi becomes powerful after it has completed its challenge.

A skull represents mankind's mortality and his history or past lives. In a sense, a Dragon Skull tattoo symbolizes that the wearer has conquered a past difficulty, whether it's the death of a loved one or a destructive habit, like addiction. A dragon is considered to be a symbol of Creation, so this tattoo design focuses on the balance of Creation versus Destruction, Birth versus Death.

The Moon has strong ties with Water, both in folklore and in reality (the Moon actually influences the tides of the ocean). It represents the ebb and flow of life, while dragons symbolize the primal forces of Nature. Since both are Water symbols, a Dragon and Moon tattoo design embodies the relationship between Nature and the Sub-conscious (Water is associated with Meditation and deep thought).

Fire is a symbol of Creation (the Phoenix rises from the ashes) and Destruction, and in numerous folk legends, dragons have the ability to do both. In these tattoo designs they represent Passion, Sexual Desire, and Power. However, in Asian cultures, a dragon is a Water creature. In this case, a tattoo with both can also represent the balance between raw emotions and mental tranquillity.

The heart represents strong emotional bonds, Love, Joy, and Compassion. Dragon Heart tattoo designs generally symbolize the protection of your loved one or yourself. Persons with these tattoos are often defensive and guarded in their love life.

The Dragon flower is a delicate plant with mysterious origins. Some artists represent the Dragon flower as the actual flower in the tattoo or as a combination of a dragon and a random flower. Dragon flower tattoos usually signify Deception (through the concealment of something) and Grace. Of course, the type and color of the flower varies the overall meaning of the tattoo.

The right tattoo design makes all the difference between having a tat that's just plain Jane and wearing an attention grabbing masterpiece. Think about what your new tat will symbolize and where it'll be placed on your body. If you need some inspiration, then visit our design page at www.itattoodesigns.com or take advantage of our Custom Design Service, where our team can design a truly unique piece for you.