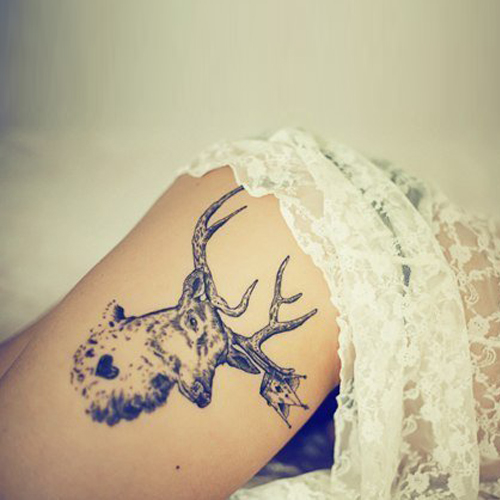 Who doesn't recall the classic Disney film Bambi, which chronicles the adventures of a lovable little white-tail deer? But Bambi's journey is only one chapter in the long history of our fascination with these creatures, whose grace and beauty have captured human imagination since the dawn of civilization.

Cave drawings of deer, elk, and other large forest animals have been around since the time when Neanderthals still roamed the Earth. Native American tribes spent much of their time studying the behaviour of these beautiful animals in an effort to understand the world around them. Soon these graceful creatures were given an exalted status in Native history and legend.

Some Wiccans and Neo-Pagans believe that the changing seasons can be attributed to the relationship between the Horned Celtic God of the forest, Cernunnos, and the Mother Goddess. Cernunnos' death brings about the death of the forests, thus heralding Winter. Spring can only return to the land after Cernunnos is resurrected and impregnates the Mother Goddess, Brighid. Unfortunately, Christians view Cernunnos as Satan because of his prominent antlers, an association that stemmed from the early days of Christianity on the British Isles.

The Meaning of Deer Tattoos

Does and Stags represent different elements. An image of a doe is closely associated with Gentleness, Kindness, and Motherhood, while a Stag is a virile, lustful, and fertile animal. In general, these creatures embody:

Read more on the meaning of deer tattoos here.

Whether you want an image of a doe-eyed deer or a strong stag, any Deer Tattoo design can be made that embodies unique traits that you identify with. Popular Deer Tattoo variations include:

The most popular Tribal Deer Tattoo designs have Native American or Celtic features, but these aren't the only design elements in Deer Tattoos. Tribal patterns have spiritual significance in their native regions and, when combined with this majestic animal, Tribal Deer Tattoos embody a variety of meanings depending on the animal depicted. A doe symbolizes Motherly love, Gentleness, and a deep spiritual connection with Nature, while a stag represents Masculine Virility, Fertility, Power, and Strength.

In the Celtic tradition, Cernunnos is a Pagan deity charged with the task of protecting the forest. He's depicted as a man with wild hair wearing deer antlers. Cernunnos is also the god of Lust and Fertility, which may account for why deer antlers have come to symbolize Male Virility and Fertility. As such, the family crests and coat of arms for many old European bloodlines, cities, and countries, like Dotternhausen, Germany, feature this design symbol. Deer Antler and Deer Skull tattoos are for the strong and virile.

Sometimes, choosing the right tattoo design can be a difficult task. There may be countless questions running through your mind, like "What will my new tat will symbolize" and "Where it'll be placed on my body". At the end of the day, the most important thing to note is that the best tattoo is the one you most readily identify with. If you need some inspiration, then visit our design page at www.itattoodesigns.com and take advantage of our Custom Service.