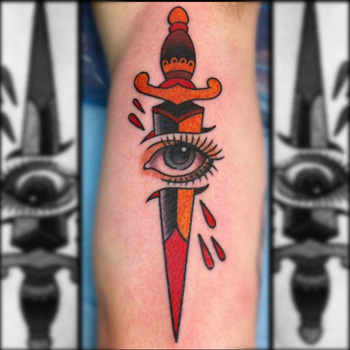 Daggers are often seen as more ruthless and cutthroat weapon than the sword, which is much longer, elegant, and primarily used in battle. A dagger, on the other hand, is perhaps more often used as a secreted weapon in stealthy assassination plots: because it is smaller than the traditional sword, it can be kept hidden on the body until the time is just right. These small, furtive weapons can be tattooed on their own or they can be a part of a larger design. Both of these options will allow you to personalize the design through the size, shape, patterning, and color of the dagger, and through the other images you choose to include with it.


Because these tattoos can be highly personalized, there are several different meanings behind the dagger. Some, but certainly not all, of the meaning are below:

Daggers are great on their own, but they also can become more meaningful when paired with other symbols and images. In addition, these tattoos can also vary by size - while the dagger is a smaller weapon than the sword, it can still be designed as a large tattoo that can cover an entire arm or leg, in addition to smaller designs on the wrist or behind the ear. 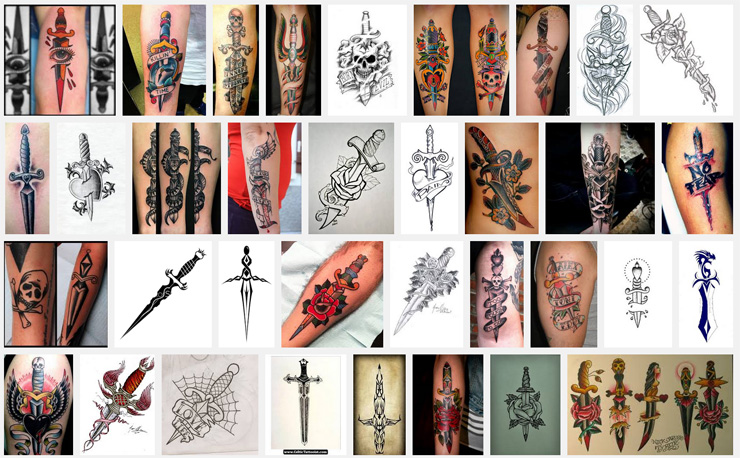 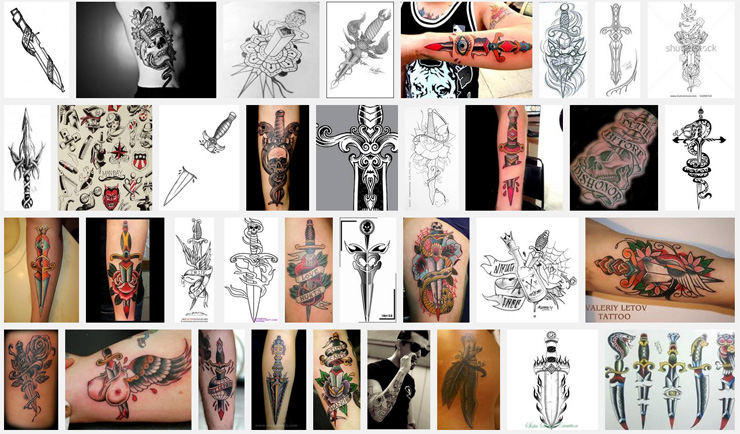 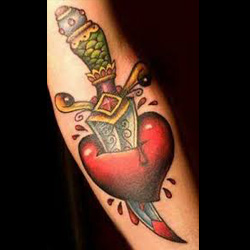 This is a classic combination of two incredibly potent symbols: the heart symbolizes love and a person's inner-most desire, while the dagger can symbolize death, destruction, and betrayal. Put these two images together and you have the ultimate symbol of heartache, love betrayed, or personal sacrifice. One way to personalize this design is to vary the position of the dagger: the dagger going straight through the heart can demonstrate a clean break with an individual (though the pain remains), while a more jagged edge can indicate a hurt that has not yet healed. Another way to personalize this design further is to include script on a white scroll going across the heart. This can be of an inspirational or uplifting phrase (such as 'what doesn't kill you makes you stronger') or be the name of the person who betrayed you. 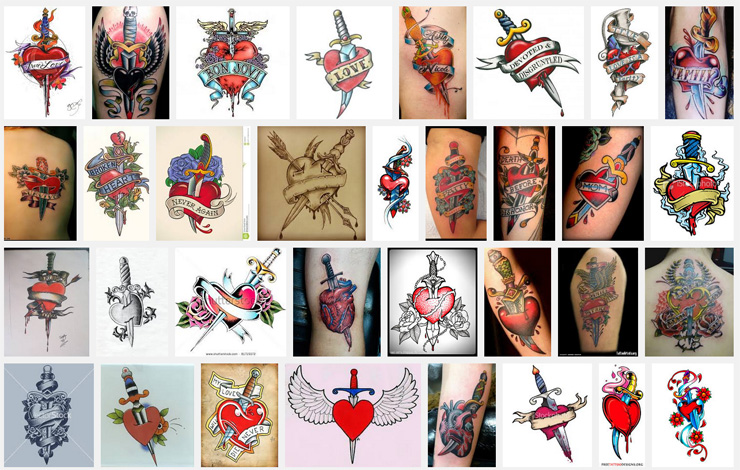 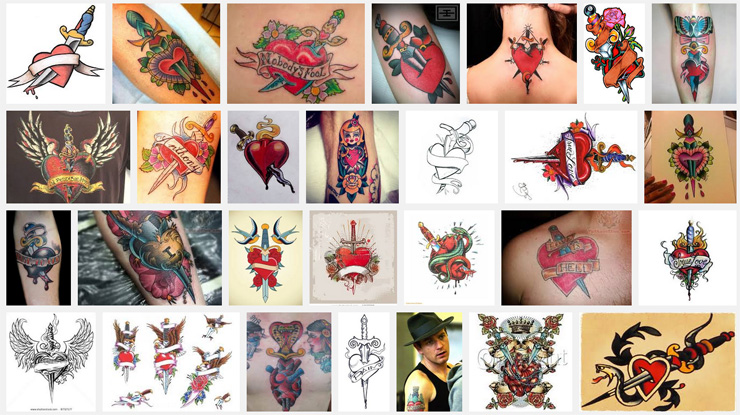 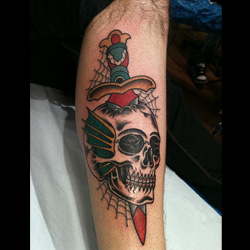 Another potent combination of symbols is that of the skull and dagger. If the daggers are crossed behind the skull, this design can be evocative of the Jolly Roger, the black and white flag that pirates would fly when approaching ships. This flag served as a warning - "surrender or die" - and is still a recognizable symbol of danger or intimidation in today's culture. The dagger and skull combination can also be quite menacing in a straight represent death, and the placement of the dagger in the skull, such as through the back of the skull or straight through the top, can create some personalization to this design. Yet there is still one other potential meaning in this tattoo: conquering one's fear of death. Placing a dagger through a skull can demonstrate that you have already killed your fear, and that death no longer worries you. 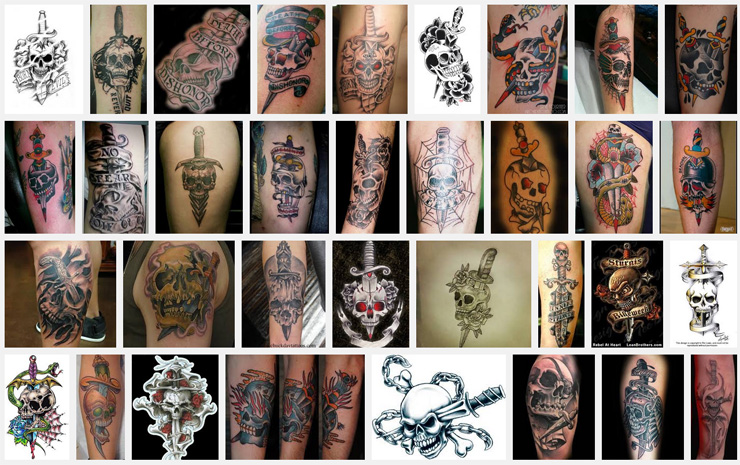 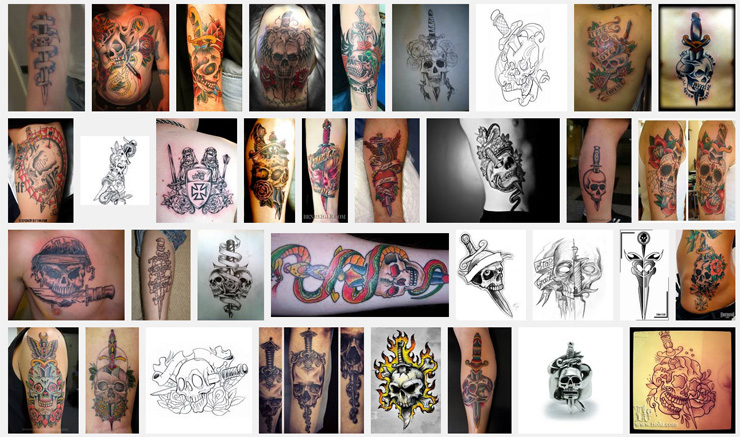 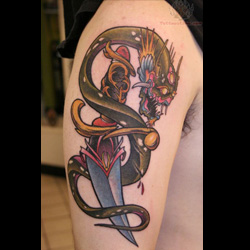 A snake wrapped around a dagger is a common symbol of healing and medicine, and is thus a popular tattoo with medical professionals around the world. But the combination of these two symbols is also representative of Mercury, the Roman god of messages and communication who was also responsible for conveying souls to the underworld. Getting this image of the snake and dagger tattooed can thus represent an affinity for Roman mythology and your personal connection to this god of trickery, luck, and travelers. To further personalize this tattoo, include a quote in Latin (the language of the ancient Romans) in your design. 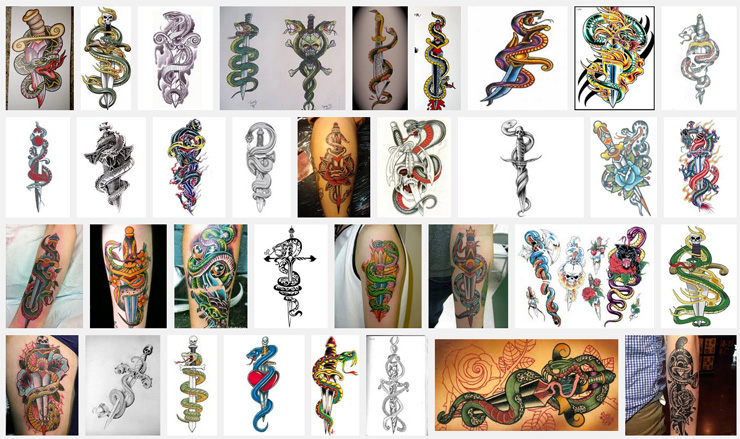 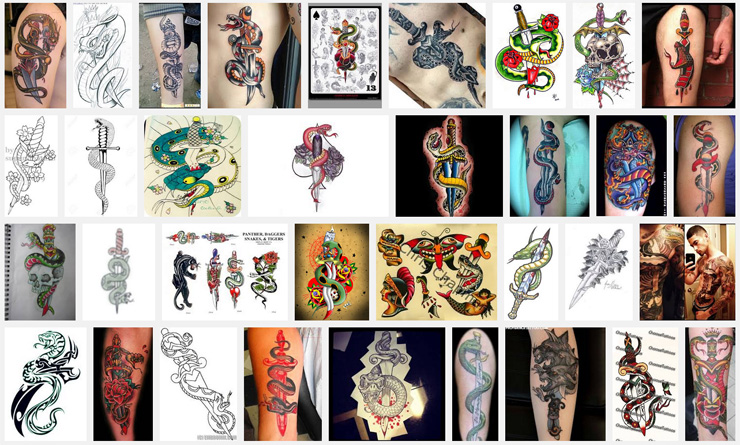 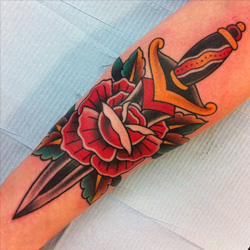 The rose and dagger tattoo can symbolize the duality of human life through the seemingly opposite meanings of the two images combined in this design: the rose stands for beauty, love, friendship, and vitality, whereas the dagger signifies death, betrayal, destruction, and insidiousness. To effectively convey this meaning, have a series or vine of roses curl around the dagger, demonstrating that the two can exist side by side. If you want to show the dominance of life's dark qualities, have the dagger piercing the rose, with a few drops of blood for added effect. You can easily personalize this design through the design of the dagger, the color of the roses, or by including a personal quote on a white scroll across the dagger. 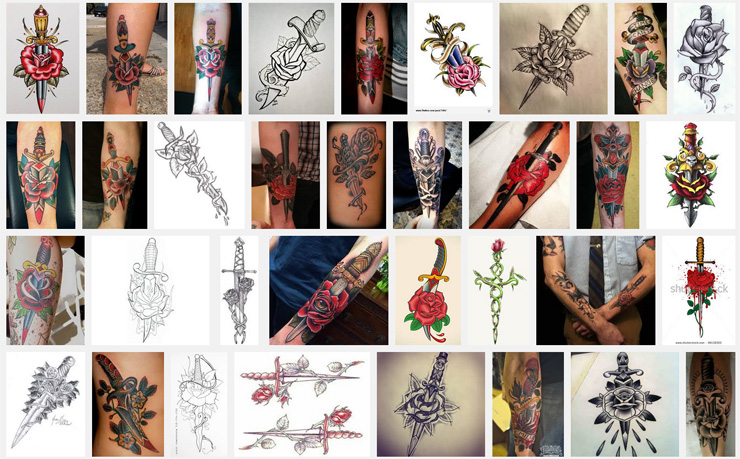 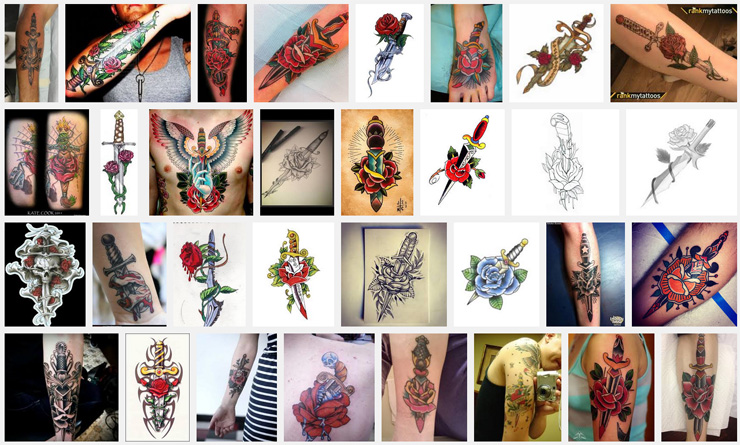 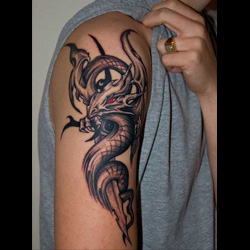 Pairing one of mythology's greatest foes, the dragon, with a smaller weapon such as a dagger can demonstrate an individual's ability to conquer any obstacle or enemy, no matter their size. The dragon and dagger tattoo is therefore a great design choice for anyone who has conquered, or hopes to conquer, an intimidating challenge through pure guts and courage. You can make this tattoo unique by including a personalized hilt on the dagger, or by designing the dragon in such a way that it is evocative of a particular fear or obstacle you've conquered: this could be through its facial expression, color, or through the setting the dragon is in. 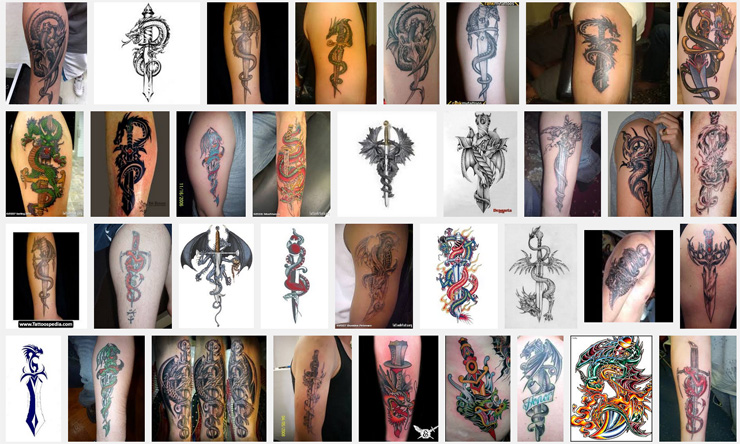 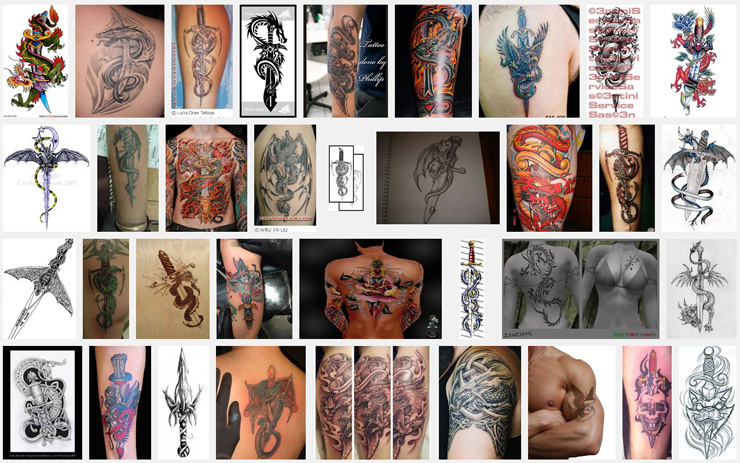 Dagger in a Garter 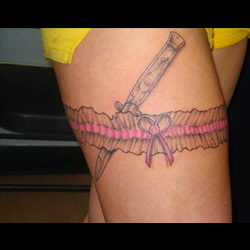 This is an increasingly popular design with women, and its placement around the thigh can be incredibly sexy and feminine. But while the placement is alluring, the image itself demonstrates the power of women: in earlier times, daggers were often concealed by women in their garters in order to serve as a means of protection should danger befall them, and if attacked they would not hesitate to stab and kill the offending party. You can play up this juxtaposition of the dainty and powerful by creating an incredibly intricate and feminine garter design paired with a particularly sharp and menacing dagger, perhaps with a few drops of blood left over from its last victim. Use your imagination regarding color and design and you'll be able to personalize this tattoo to suit your own unique personality. 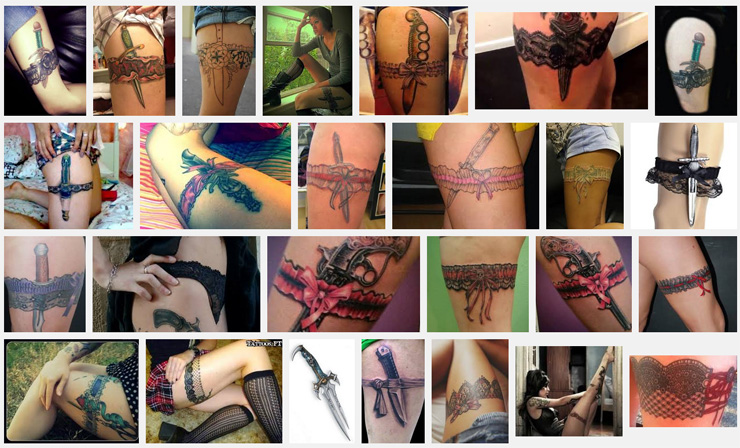 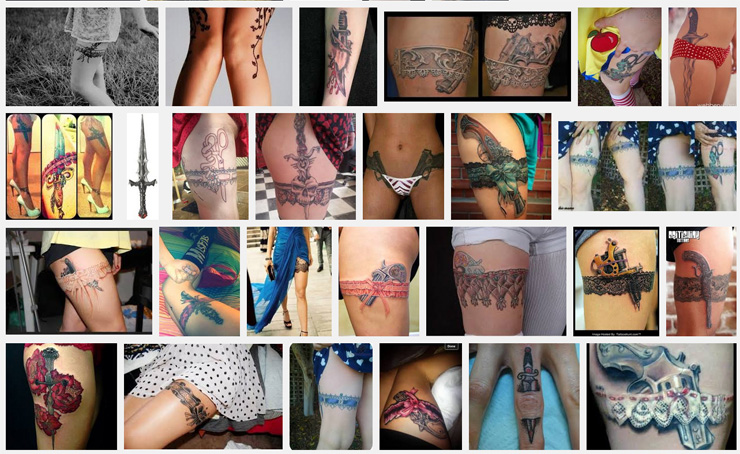 Dagger tattoos can come in a variety of sizes and designs, making them perfect for those who want a large full-back piece or for those who are looking for a smaller image on their wrist or ankle. Daggers are becoming increasingly popular amongst men and women for their potent symbolism, potential for personalization, and connection to other powerful symbols. As always, work closely with your tattoo artist to make sure you have a tattoo design that is unique to you! For custom design of a dagger, you can check our Custom Tattoo Page.