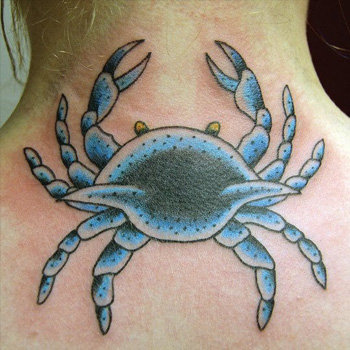 Though less common on people living inland, crab tattoos are not unusual for people living in and around coastal areas to get: the crab's links to the ocean and the livelihood that it provides for many people along the shore make it a powerful symbol of wealth, renewal, and the adventure of the sea. In addition, the crab's place as the fourth sign of the Zodiac (Cancer) imparts additional meaning for many individuals, making the crab tattoo a great idea for a range of people contemplating their next ink.

Within animal symbolism, the crab has strong lunar connections and is representative of rebirth and renewal. The crab (and sometimes other shellfish) is featured on the Moon card in Tarot, and the crab's shedding of its shell is akin to the moon's own lunar phases. This act of shedding and then acquiring a new shell makes crabs symbolic of rebirth and renewal, as well as the cyclical nature of life. In addition, their connection to the moon also connects crabs to the feminine: the moon serves as a motherly guide to the crab as it resides in the depths of the mysterious ocean.

Around the world, the crab also holds particular meaning in certain cultures and mythologies. For instance, in China, the crab is seen as a symbol of good luck, as well as virility and masculine potency: when eaten, it is thought to nourish a man's semen. Crabs have been seen in other ancient cultures as well: ancient Peruvian pottery features paintings of a half-human, half-crab rainforest deity, and the depictions of the crab on other Peruvian clay vessels indicate the general prominence of ocean creatures as deities in this ancient culture. In addition, crabs are present in the creation myths of some African cultures and the Nootka culture of the Pacific Northwest.

The crab's own physical attributes also lend themselves to deeper, symbolic meanings. The crab's hard, exterior shell serves as a symbol of protection, while its sharp pincers allow it to fight back when faced with an attacker. Its odd way of 'crab-walking' also indicates a tendency to go back and forth on ideas.

The crab is also a sign of the Zodiac, and people born under the Cancer sign tend to be loyal, contradictory, moody (but unwilling to show this moodiness to others), and lovers of domestic life. They are good friends, but also need their own space and occasional alone time, and they tend to be interested in history and the beginning of things, leading to hobbies such as genealogy and heraldry.

Finally, the crab's status as a sought-after delicacy and favorite food of many has led some fisherman to gravitate towards crab tattoos. Crabs are a way of life for many people, especially for those whose income and prosperity relies on these fickler underwater creatures. Crab-fishing is a dangerous business, and getting a crab tattoo can demonstrate one's dedication to the task at hand, as well as symbolize their strength and resolve in going after this creature.

The Meaning of Crab Tattoos


The potential meanings for crab tattoos are seemingly endless: with a place in many ancient cultures, as well as potent modern meanings, crabs are deeply symbolic animals. Below are some of the primary meanings for the crab:

Because of its many different meanings, getting a unique crab tattoo will not be difficult: there are so many symbolic designs to choose from, or you can devise your own! Always work closely with your tattoo artist to ensure that he or she understands your vision and is able to convert that to a design that suits your wants and needs. 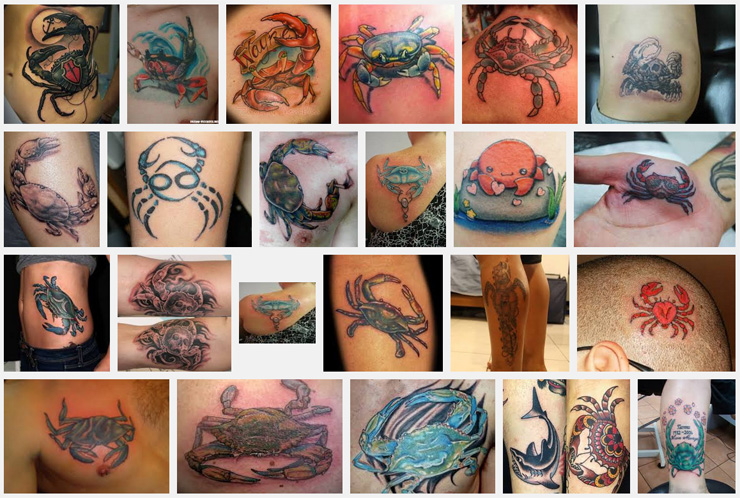 This is one of the most common ways that crabs are incorporated into tattoo designs. Often, those getting a Cancer tattoo will have the crab done in a thick outline, almost in the style of a tribal tattoo, with the swirls of the Cancer symbol as the body/head of the crab. While often done in black, this tattoo can also be colored according to your own personal taste - a great opportunity for you to make your tattoo unique to you. For added Zodiac emphasis, you can include "Cancer" or your birthdate underneath the crab to indicate that this is your sign. 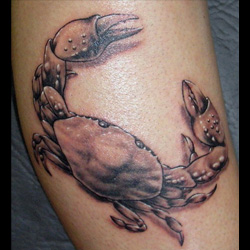 For those living along the coast, or for those who feel a personal connection to the crab through its lunar symbolism or its representation of rebirth and renewal, getting a realistic crab tattoo is a great option, and the numerous different species of crabs means that your design will likely be quite unique. It's important to remember that while we often associate crabs with the color red, they only take on that color when cooked! In reality, crabs come in all shapes, colors, and sizes: from the deep blues of the Blue Porcelain Crab to the purples and oranges of the River Crab, you're sure to find a crab that looks good on you! 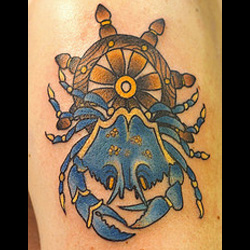 For those who make their livings from catching and selling crabs, getting a tattoo of this creature can hold deep personal and symbolic meaning. One way to incorporate a nautical element into the design is to have the crab designed as a compass, with its pincers grasping the 'N' north symbol above its head. Crab-fishers can also include their boats in the design to make it even more personal, and to depict the vessel that assists them in their dangerous employment. To indicate success, crab-fishers could also depict the crabs caught in traps, symbolic of a good catch and subsequent prosperity. 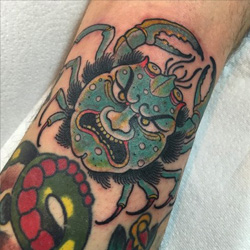 The prevalence of crabs in cultures around the world means that you can incorporate the artistic style of these cultures into your tattoo design. Getting the Moche half-man, half-crab deity can demonstrate your Peruvian heritage, while writing your name in Chinese symbols underneath a crab can indicate Chinese heritage or your connection to the crab as a symbol of good luck and/or virility. These cultural touches are great ways to ensure that your design is unique and has another symbolic level that is personal just to you.

Crab tattoos are great for both men and women, and their relatively small size means that you can get a crab tattoo just about anywhere on your body. Whether you're a Cancer, crab-fisher, or simply love this animal, a crab tattoo is a great choice for anyone wanting a unique, but deeply symbolic, animal tattoo. For custom design of a Crab, you can check our Custom Tattoo Page.