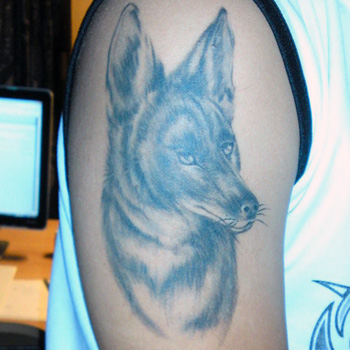 The Coyote is an animal to be feared, admired, and respected. Across numerous western cultures, the animal is seen as the embodiment of the spirit of Mother Nature and, with the exception of the Buffalo, has become the quintessential image of the Wild West.

The word 'coyote' is a Mexican reboot of the Aztec word, 'coyotl', which means "trickster". In many Mesoamerican (like the Mayans and Aztecs) and Native American cultures, the Coyote is seen as the ultimate trickster that brings many gifts to mankind or steals much needed resources from unsuspecting deities and mortals. According to the various myths, he is the "Jack of all Trades", bringing music and creativity to some tribes, teaching others the secrets of medicine, and showing others how to create fire. The Coyote is an animal of infinite wisdom, intellect, and knowledge, and it isn't uncommon to find Native American stories in which he plays the role a wise counsellor and in others, he is the cunning deceiver. Native American shamans and storytellers may have been inspired by observing the pack on the hunt. Coyotes are known as exceptional hunters and usually display an enhanced ability to plan, communicate, and coordinate the movements of the pack, all in the aim of catching their prey.

Coyotes are key figures in many creation stories. According to Miwok legends, the Coyote stood up and "shook his walik", sending matter into the four compass directions - east, west, north, and south. For the Navajo and the Zuni, the coyote's mischievous ways interferes with his ability to create a perfect world, resulting in the presence of injustice and cruelty in the world today. An extension of the creation myths is the Coyote's envious reputation as a creature with a huge appetite for sexual pleasure. The Coyote deity has been known to invade the beds of unsuspecting women and seduce them with his clever words. Even the fertility god of the Hopi, Kokopelli, is no match for the animal's sexual prowess. The Navajo believe that the Coyote is the bearer of new life, bringing seeds and fresh fruits to the world.

The Coyote is an emblem of Communication and Family. As pack animals, they look out for the interests of the entire group and all members of the pack move with one mind. Doing so is no small feat; it takes a sophisticated level of communication to be able to coordinate a group of at least five individuals. The haunting howls of a coyote on a cold, clear desert night is an audio-visual experience that's sure to leave you awe-inspired and a little fearful.

But the Coyote is much more than just a lustful trickster that spends its nights howling at the Moon. The animal is a totem for Healing and Medicine in many Native American traditions. According to the legends, it was the Coyote who taught the early shamans and healers their craft. Kiowa warriors were brought back from Death's door after the noble coyote licked their wounds and restored their strength. "The Coyoteway" is a ritual dance meant to cleanse the minds and hearts of lost, confused, and corrupted souls. The ceremony is led by the tribe's spiritual leader and is usually performed over the course of several days. The Coyoteway ceremony helps wrongdoers make amends for their sins and make up for past crimes.

In the European context, the Coyote became associated with Witchcraft and Sorcery, but this context is tinged with prejudices from the past. When Christian Europeans first encountered Native Americans, they couldn't understand the religion and spiritual traditions of the locals. As Christian Europeans began to dominate much of Central and North America, they dismissed the local deities and spiritual signs as the work of the Devil. Like the gods of many other non-Christian traditions, the Coyote became a sign of evil and sorcery, and these beliefs became deeply embedded in the modern psyche.

The term 'Coyote' doesn't always have a positive connotation. It is used to refer to human traffickers along the Mexico-America border, who go to great and often cruel lengths to take advantage of desperate persons seeking to better their lives. In his classic novel, The Tortilla Curtain, T.C. Boyle takes artistic license to examine the life of illegal immigrants chasing the American Dream and the American psyche as it relates to issues of immigration and assimilation. He likens the immigrants' "never die" attitude, adaptability, and fighting spirit with that of the coyote, and shows that they are survivors trying to flourish in an unforgiving world. Coyote personalities thrive despite the odds stacked against them.

Are you a wise and formidable fighter?

The Meaning of Coyote Tattoos

The Coyote is an animal of power. It is wild and uncontrollable while being protective and nurturing. Coyote Tattoos embody several traits, including:

From the deep reverence and spiritual connotations of a Tribal Coyote Tattoo to the playful presence of images of Wile E. Coyote, Coyote Tattoos embody many moods and personalities. In most designs, the animal is drawn in a position of power and strength, and sometimes is connected or infused with the image of natural elements like a full Moon, a bolt of lightning, or sitting high atop of steep cliff. Tattoos with these depictions pay homage to the strength and dominant nature of the animal.

Tribal images of Coyotes tend to be, for the most part, influenced by various Native American cultures like the Haida and the Sioux. The animal is one of the central totems in tribal history and placing the image of a coyote on your body is believed to infuse you with the intelligence, speed, and survival instincts of the animal. A Tribal Coyote Tattoo gives you a spiritual connection to a particular native tribe and shows the world that you are a powerful, wild spirit.

The most popular coyote is, of course, Wile E. Coyote. His countless schemes and 'never give up' attitude pay tribute to the animal's intelligence, strength, and cunning. Wile E. may've been voted one of TV Guide's 60 Nastiest Villains of all time, but for most persons, he represents fun and frivolity. A Cartoon Coyote Tattoos plays up your playful personality and your 'kid at heart' mannerisms, but also identifies you as brilliant trickster.

Channel your inner coyote with a great tattoo design that speaks to your mental astuteness and powerful presence. When it comes to creating the perfect piece of body art, there's no limit to what your imagination can cook up, so dream big. Think about what your new piece will symbolize and where it'll be placed on your body. Creating a unique design can be a daunting task, so if you need help, our team of artists is more than happy to give you a hand. Simply swing by our design page at www.itattoodesigns.com and take advantage of our Custom Tattoos.