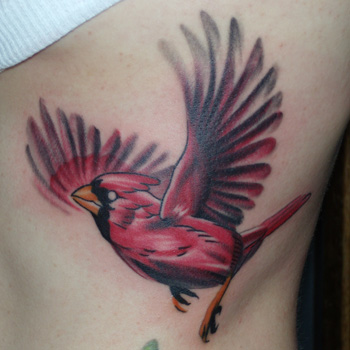 Vitality and Energy; these are two words that come to mind when the song of the Cardinal echoes from your backyard. There is nothing demur or coy about these birds; they make their presence shine through even the chill of a winter's day.

In Germany, the Cardinal became the one of the symbols of Christmas, thanks to the kind hearts of tough craftsmen. Long ago, it was customary for German craftsmen to build bird houses for their little red friends as a way of giving shelter to these poor animals in the dead of winter. Soon, a cardinal at Christmas became a symbol of Hope, Happiness, Compassion, and all things related to the most wonderful time of the year.

The males of the species are the most flamboyant; they strut around with their famous red plumage on display for everyone to see. In the world of the Cardinals, the brighter and flasher bird wins the day and the wing of the fairer sex (so to speak). Their chirps, warbles, and beautiful songs bring a kind of energy to the dullness of the winter that is hard to ignore. As such, in the battle for showmanship and style, the Cardinal is the Peacock's challenger. Persons with a cardinal personality are hard to ignore and impossible to forget, but by the same token, they are not associated with arrogance or egotism.

Cardinals are also fiercely territorial. They are infamous for laying waste, relatively speaking, to foes and unwanted humans who stray too close to their nest. It is this sense of duty and loyalty to one's home turf that makes the Cardinal a symbol of pride. It is no wonder why the city of St. Louis picked the Cardinal as its mascot for its famous baseball team.

The Meaning of Cardinal Tattoos

These fiery little things represent a number of traits:

There are not that many variations to Cardinal Tattoos, mainly because it is hardly worth tweeting such a distinctive piece of body art. In the tattoo world, it is the Cardinal's color that sets him apart from every other design, as such, most pieces will play up the vibrancy of the bird's plumage. Cardinal Tattoos are great ways to show pride in your territory and your family.

Although the design is simple and understated, it is hard to ignore the intrinsic beauty of its lively red color. When creating your body art, you need to think long and hard about the meaning of each element in your design and where the piece will be placed on your body. Poor placement is equally as disastrous as design flaws. Our team would be more than happy to help you out when it comes to bringing your piece to life. Our Custom Design Service has tons of features and an army of artists at your disposal. Simply swing by and have a look.