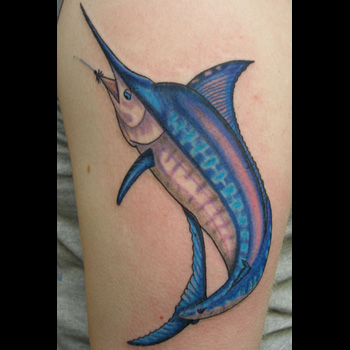 Blue Marlins are more than just succulent morsels that scintillate the taste buds of the epicurious. Any deep sea fisherman can tell you that Blue Marlins are as wild and untamable as the sea. Their fearsome looks and nasty temperament have earned them the reputation of being some of the most difficult fishes to hook and reel in, thus making them one of the most prized catches of any angling adventurer.

With the exception of the famous Great White Shark, Blue Marlins are the epitome of maritime Power and Strength. They are lightning fast, can skewer inattentive fisher-folk at a moment's notice, and have no qualms about dragging a fully grown man from his boat and taking him for a wild ride in the open waters. Their fearsome reputation has earned them a place of prestige and tons of respect amongst serious fishermen. For most anglers, the thrill of bagging a big one lies in the chase and the story of how the gigantic beast was difficult to reel in is sometimes more important than the actual size of the fish.

Many writers have taken note of man's strange love affair with the Blue Marlin. Ernest Hemmingway's classic, The Old Man and the Sea, tells the story of a sea battered Cuban fisherman (Santiago) and his undying quest to conquer the unconquerable Blue Marlin that had been mercilessly taunting him for days. In a sense, this story plays up the marlin's reputation as a formidable foe and the struggle between the old fisherman and the giant fish is, in many ways, a comment on mankind's existence and our obsession with achieving fame and fulfilling our desires. Santiago was driven by his desire to change his fortunes and gain honor by conquering a formidable marlin and his obsession was, in many ways, similar to that of Captain Ahab when he was on the hunt for Moby Dick.

A Marlin Tattoo symbolizes your stubbornness and unwillingness to surrender; you'd rather achieve a goal or die trying.

The Meaning of Blue Marlin Tattoos

Blue Marlin Tattoosare a relatively rare sight and are only common among folks who are addicted to the thrill of the deep sea hunt. More often than not, you'll find this emblem as a proud badge of honor that symbolizes that you've conquered a formidable foe. In general, Blue Marlins represent:

Marlins are rather uncommon subjects for body art, but for a select few, this fish is an emblem of maritime pride. In tattoos, Blue Marlins are often depicted in a position of power and images of marlins leaping out of the water, dueling with each other, or silhouetted against a setting sun are the most popular pieces of the series.


If you are as wild and untamable as the sea, then a great Blue Marlin Tattoo can channel your wayward personality. Your design can be as colorful and as creative as you wish, after all, when it comes to your imagination, the sky is the limit. Regardless of what elements you may add to your piece, think carefully about what it means and where it is on your body. Creating a unique design can be a daunting task, but if you need help, our team of artists is more than happy to help.  Swing by our design page at www.itattoodesigns.com and take advantage of our Custom Tattoo Design Service.