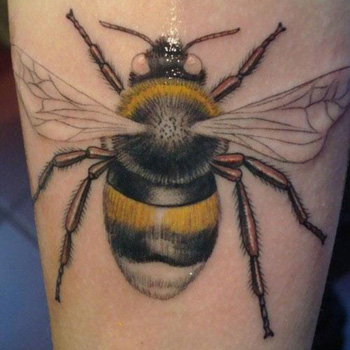 Buzzing around like a busy bee? From our language to our religion, our medicine to our works of art, almost every aspect of human culture has been influenced, in some way, by our interactions with bees.

Long before the Greeks and Egyptians built monuments to their deities, ancient cultures held the Bee as a representative of the Divine. Honey was, and still is, considered to be the 'Food of the Gods' to many indigenous peoples across the world. Ancient Aegean and Near East cultures believed that bees were the sacred bridge between the physical and the spiritual worlds, and many decorated the tombs of their loved ones with images of bees. Mayans paid their respects to the Bee god, Ah-Muzen-Cab.

Bees are prominent in the creation legend of the San people from the Kalahari. According to the story, after helping a praying mantis across a raging river, a bee planted a seed inside the mantis' body. The seed eventually grew into the first human being. Bees are often incorporated into rite of passage rituals for young men. In the Sioux and Dakota Indian cultures, young boys place a game of 'War upon the Bees', which is designed to teach them the traits needed to becoming a man - bravery in the face of danger and the ability to withstand pain.

Like a bouquet of fresh cut roses for your lover, a honeybee symbolizes Love and Affection. The Hindu god of love and desire, Kamadeva, travels around much like the god of Love, Cupid, does with a bow made from sugarcane and honeybees bringing couples together. Bees are often seen as innocent and childlike, as such, many cartoon characters in children's films are depicted as sweet honeybees.

Even our language has been sweetened by the honeybee. In ancient Greece, it was rumored that the great poets and charmers like Plato, Pindar, and Achilles anointed their lips with honey to give them the 'Gift of Eloquence'. Their gift may've been the result of drinking too much Mead, a fermented honey drink that was brewed long before mankind discovered how to ferment fruits for wine. In fact, the ancient Greek phrase for being drunk translates to being 'honey intoxicated'.

So a glass of Mead, sing a sweet song to your lover, and dream up your Bee Tattoo design.

The Meaning of Bee Tattoo Designs

The Bee is a hardworking, highly organized insect. With such an upstanding reputation, it's no wonder why humans find them so fascinating. Honeybee designs embody number of characteristics:

Bee Tattoos range from the comical and cartoonish to designs that look more realistic. Although the color scheme of Bee Tattoos tend to be rather standard (yellow and black), they usually feature a number of design elements. Some artists prefer to focus on the delicate beauty of a single bee, whereas others tend to highlight the hive as a cohesive organism. Still, there are others who prefer to bring the powerful symbolism of that bees are associated with in the shape of intricate honeybee cones instead of using the image of a bee. Popular Bee Tattoo variations include:

In many indigenous tribes across the globe, bees play an important part of daily life. They provide food (honey and larvae), materials for hunting and other critical tasks (beeswax), and are a means of defense for local villagers. Given their status in human history, it's no wonder why so many indigenous regions pay homage to these tiny animals by creating religious symbols and icons that glorify the bee. Tribal Bee Tattoos are an extension of this practice and serves to represent man's spiritual connection with the free flying, hardworking, team player that is the Bee.

Bumblebees are the heavyweights of the Apoidoea family. They are the lumbering mammoths of the air and the sound of their basal buzz is recognizable in an instant. Including the famous transformer, Bumblebee, these animals are known for their fierce loyalty to a common cause, their ability to work in teams, and her industrious nature.

The Queen Bee always has the final say. They are the head honcho of the hive, controlling the every motion of thousands, if not millions, of other beings around them. Queen Bee Tattoos are reserved for chic, confident, divas who love taking charge of the world around them and who, despite their delicate nature, aren't afraid to get tough. Queen Bee Tattoos are usually worn by defiant, strong women whose personas tend to kick butt and ask questions later.

It isn't easy finding a tattoo design that fits your personality, style, and looks fantastic on your body, but the task is not as daunting as it appears to be. Before the needle touches your skin, think about what your new tattoo will symbolize whether or not you'll add other elements to the design. At the end of the day, the best artwork is one that you'll wear proudly twenty minutes or twenty years from now. If you need inspiration, then our design team can help you create a truly unique piece. Visit us at www.itattoodesigns.com and take advantage of our Custom Tattoo Service.