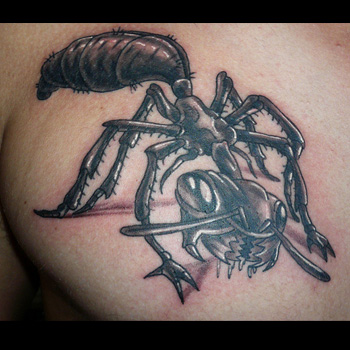 These highly social relatives of wasps and bees have been a major part of human history. From the crowded floors of the Amazon jungle to the frozen plains of Antarctica, they have colonized almost every square mile of land on the planet by hitching a ride with humans.

Early farmers used them for biological control to protect their crops from pests. In South Africa, they are used to harvest rooibos in order to make herbal teas. In the medical field, they are of extreme importance. With their detachable mandible, army ants are the perfect surgical sutures within some indigenous tribes. Ants have also made their way into our technology. The science of Biomimetics focuses on understanding insect structure and behavior in an effect to build better mechanical structures.

Feeling hungry? Then take a quick trip to certain parts of Asia and jazz up your Thai salad with a few scoops of fried ants or head south of the border for a dish of Mexican escamoles. Trying to eat healthy? Then try some roasted Atta laevigata and add some spunk to your love life with these rumored aphrodisiacs.

Ants also have a place in our religious beliefs. In the Christian Bible, there are many parables about the noble traits of the hardworking, obedient ant, while in the Quran, there is a story of an ant warning others in its colony to take shelter from the crushing feet of King Solomon's army. Some Native American tribes believe that they were the first creatures to exist shortly after the world was created, while in Africa, these busy insects are seen as messengers of the gods.

Even our literature has been influenced by the noble ant. Mark Twain, H.G. Wells, and T.H. White are some of the famous authors and poets who have drawn inspiration for their literary masterpieces on an afternoon stroll through their gardens. So take a stroll outside; maybe you'll find inspiration for your new Ant Tattoo design.

The Meaning of Ant Tattoo Designs

These tiny busy bodies are known the world over as emblems of:

Ants are known as the persistent plodder, not as beautiful insects, as such, tattoo designs featuring these little beings tend to be rather monochromatic. But what Ant Tattoos lack in color, they make up for in intricate designs. Popular Ant Tattoo variations include:

Each tribal pattern carries spiritual and cultural significance for the indigenous people who identify closely with the particular pattern. Tribal markings fall into the domain of the tribe's elders, but with the popularity of global travel, many sacred symbols have now become common place tattoo designs. In general, Tribal Ant Tattoos are a great way to evoke the spiritual power and energy of the ant and expresses your respect for both the culture and the noble qualities of this little insect.

Hollywood blockbusters like A Bug's Life and Antz have firmly cemented the position of these intriguing insects as icons in children's stories. Artists strive to bring out the best traits in their cartoon ants and said tattoos embody an air of Innocence and childish Frivolity.

In twenty years, will you still love your tattoo? Although our tastes and personalities change with time, one way to ensure that your artwork will last the test of time is to choose a great design. Think about what your new tattoo will symbolize, where it'll be placed on your body, and what other features you may add to the overall design. Your new ink cannot be erased with a Mr. Clean Magic Eraser, so take the time to research and create a great blueprint. If you need inspiration, visit our design page at www.itattoodesigns.com. Our artists can design a great piece that is bound to make you happy.